What is a Titus 2 Woman? 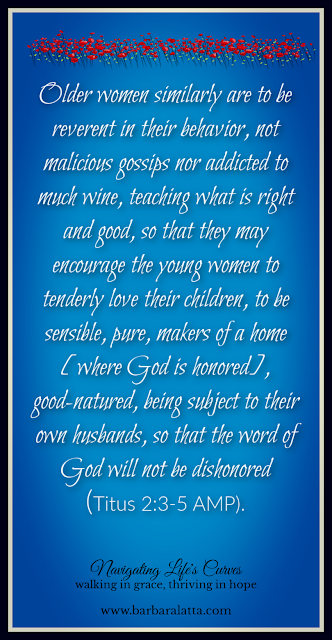 Paul is exhorting Titus in foundational doctrine to operate the churches he has founded. These people came from pagan backgrounds before knowing Christ. Some of their old habits needed to be broken and they had to be encouraged not to fall back into the lifestyles of those around them.

The Greek culture was one of excess whether in drunkenness or immorality. He is telling the older women to be examples to the younger ones as to their responsibilities. Instead of going from house to house gossiping and drinking, they were to fulfill the roles in the home of raising children to know Christ and to help in the support of the home.

This doesn’t mean because the culture is different, we ignore what the Word of God says. But we should interpret the instructions according to context. We live in a day now where most women work in jobs outside the home atmosphere. Both men and women work together in supporting capacities to make the home run smoothly.

We women cringe when we see scriptures that use the words “submit” or “obey.” These definitions have become skewed over the years and dragged through the mud by feminism.

God doesn’t tell women to become doormats or abuse victims. He is outlining the positions of family members. God designed men to be providers and protectors. Women are nourishers and supporters.

This doesn’t mean women can’t be strong. The Proverbs 31 woman was smart, disciplined, wealthy, a businesswoman, and a leader. Lydia was seller of purple, which meant she was a marketing expert and rich (Acts 16:14). Paul was ministered to by Aquila and his wife Priscilla who hosted a church in their home (1 Corinthians 16:19).

God is not saying to blindly submit to a person who would tell us to do wrong. We fulfill the roles God has called us to as we submit to one another in the fear of God.

So the word of God will not be dishonored (v.5). In verse one of Titus 2, Paul encourages Titus to instruct men and women so their lives identify them as true Christians. This showed the heathen world the difference between Christianity and idol worship.

When the world sees our godly behavior, Christ is magnified.