Posted by Barbara Latta at 11:39 AM No comments: 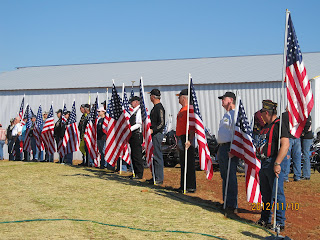 Recenty I heard a news story regarding a teacher in South Carolina who removed an American flag from the wall, placed it on the floor, and proceeded to stomp on it. His point was that it is only a piece of cloth and doesn't mean anything.Well, kudos to the school principal for putting him on administrative leave. That principal was a military veteran. He knows what it means to pay a price for freedom. I guess that teacher does not.

I wrote this poem a few years ago in response to a similar situation.


The Soul of Old Glory
by Barbara Latta
Old Glory started out with needle and thread
pieces of cloth of white, blue, and red.
The standard was carried and waved over battle,
It's waved over graves and political prattle.
The message was clear, "it's freedom I won,
paid with the blood of your daughters and sons."
So honored was that banner that it never touched the ground,
even in battles with bullets all around.
When the bearer would fall another would rise
to carry Old Glory lest we see its demise.
So revered was the flag whose message would wave
that it sight over land, over sea, or the grave
would inspire Americans to fight and pursue
to never give up, do what we must do,
To defeat the foes who challenged and taunted
to chase and defeat our enemies, undaunted.
It's waved until tattered, soiled and torn
It's waved in the face of the enemy's scorn.
For with each tatter and tear a drop of blood would cry,
and Old Glory would wave and continue to fly.
The flags that have flown over past victory posts
are now carefully preserved lest their history be lost.
But locked in their glass cases has the meaning behind
Old Glory's message made some people blind?
For to some it's just a nice history relic
to wave over fields where we play and we frolic.
For now the banner of freedom is spit on and burned,
and so few care that Old Glory is spurned.
They use "freedom of speech" as an excuse to abuse
forgetting how easily that freedom they could lose.
Old Glory waves on the grave's sacred soil
asking "why do you hurt me, do you forget my toil?
I am the symbol for you to give you the right to do what you do.
I welcome the foreigner with open arms
to come enjoy my freedoms and flee from harm.
So why do you curse me and say it's an offense
to wave me and fly me, it makes no sense?"
Old Glory's cry in days gone by
of victory and freedom, has it been a lie?
No, for you see the soul of Old Glory is the people of her land,
the ones who dare to still take a stand.
For on many hillsides plains and sands
arises a shining, victorious band
of those whose yearning for freedom will never be lost,
it's the ones who have paid a price
the ones who love it the most.
﻿
Posted by Barbara Latta at 11:41 AM No comments:

Today, my church shared an insert in our bulletin titled, "The Jesus Memo." I would like to share it with you.


Today, remember Jesus. Remember to speak up for those who don't have a voice. Be kind to everyone. Today, be last. Really. Jesus did not come to be served. But to serve.

Don't worry about your clothes or anything like that. God is looking for you and will provide all that you need. Tomorrow...tomorrow can and will take care of itself. Today is the day to live for God.

Remember that you have a Father in heaven who wants to lavish love on you. Ask. Open your eyes and watch what He does. Live today with a pure heart. You will see God. Today, put your faith in the One who calms storms.

Give your life to the one who heals the sick and takes away the sins of the world. Remember what He said about camels and needles. Sometimes money really can cause more problems than it's worth.

If you want mercy, you need to show mercy. Build people up with a kind word or gracious gesture. When you do good things for people...hide it from others. Do good in secret, and you'll have a great reward.

Let Him have your load. You weren't meant to carry it all by yourself. There is rest.
Don't forget: a little bread and fish will go a long way in the right hands.

Be Jesus to everyone you meet. Love God. Love others. Live the Gospel.
Today will be different.

New diet aids, nutritional supplements, products for better hair, and wrinkle removers all guarantee us a better tomorrow. Talk shows give advice on keeping New Year’s resolutions that will work this year. Buying this sponsor’s product will bring satisfaction or your money back.


Before you get swayed by professional marketing that plays on your emotions, try to take a realistic look at what your goals are for this year. Don’t let a TV commercial make your decisions for you. Examine your life and what you want to change or accomplish and find out what tools you need to reach your goal.


If you want to lose weight, instead of starting a drastic diet, just eat smaller portions of the food you like. Walk a few steps more than you did yesterday.


Don’t start out trying to read the entire book of Leviticus in a day if you want to read through the Bible. Start with the New Testament and read a chapter each day. If you don’t make it through the entire Bible in one year, who says you have to? The point is to develop the habit of reading it.


Our long term goal is to establish some kind of change in our life. To do this we need to:


·         Make realistic goals that are achievable and write them down.


If we can learn to be consistent in working our daily goals, we will soon see the long term ones achieved. Navigating New Year’s resolutions doesn’t have to be a dreaded chore.


Have a Happy New Year and enjoy the ride!
Posted by Barbara Latta at 9:17 AM 2 comments: