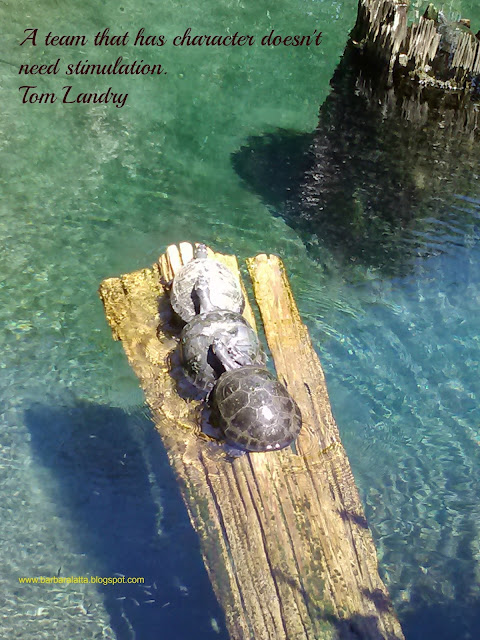 This quote from one of the most successful coaches in the NFL says it all. A person with character will push themselves, do what is necessary, and work with a team.

Do you have examples of how teamwork helped build character into your life? Share your thoughts.
Posted by Barbara Latta at 7:00 PM No comments:

Do You Know Who You Really Are?

If you are a Disney fan you have probably watched the scene of the evil queen talking to the magic mirror in Snow White and the Seven Dwarfs.  “Mirror, mirror on the wall, who’s the fairest of them all?” she asks the glass image. She was always pleased with the answer as long as she was the fairest in the land. When the answer she heard was unfavorable, she fell apart because her value came from her looks.

A glass mirror can only project back to us the physical image looking into it. When we depend on that to gauge our view of ourselves we are limited. The physical part of us is not our true being. The Bible says, “…because as He is, so are we in this world” (1 John 4:17).  When we look at ourselves in our body with all its faults and weaknesses, it becomes difficult to believe that verse because we are judging by what we see in the physical realm.

But the Bible gives us promises about who we are and what we have been given:


These promises and the hundreds more in the Bible are the spiritual mirror we must see ourselves in because this is who we truly are.

A distorted mirror like those in arcades and circuses will portray the wrong image. We may look super tall or incredibly fat but what we see is not the true person. We can laugh when we view these images because we know they are not true. We have seen ourselves in an unflawed mirror numerous times during our life so we know what we are seeing is not a reflection of our true body.

Distorted thinking does the same thing an arcade mirror does. An image is set in our mind that is not true about our identity. We need to see ourselves in God’s mirror daily so the reflection of Him will replace distorted thinking. The more we see ourselves through the mirror of the Word, the less we will believe lies about ourselves. Knowing who we really are in Christ will empower us to resist temptation (James 4:7).

If we could ask the mirror who is the fairest, the answer would be Jesus. And because He has made us to be like Him, we can be the fairest, too.

Are you seeing yourself through the correct mirror? Find the right one and you will know who you really are.

How responsible are we if we as a nation make a deal with Iran and impose their evil values on the rest of the world?

Share your thoughts.
Posted by Barbara Latta at 7:00 PM 2 comments:

What Happens When You Dig for God's Treasure?

“There is gold and a multitude of rubies, but the lips of knowledge are a precious jewel” (Proverbs 20:15).

My hometown is very close to the Crater of Diamonds State Park in Arkansas, North America’s only diamond mine. The mine is not a cave like the image brings to mind, but a big field of dirt. You take your buckets, shovels, and screens and go dig to see what you can find.

Many people have found treasures here over the years and the larger finds always make national headlines.Recently, an eight carat diamond was found almost breaking a park record.When there is potential for finding something valuable, human nature drives us to search no matter the cost. The work can be hot or cold, dirty, bug infested and back breaking, but none of that seems to matter when the chance of finding a gem is calling.
Read more »
Posted by Barbara Latta at 7:00 PM No comments:

Find The Value of Solitude 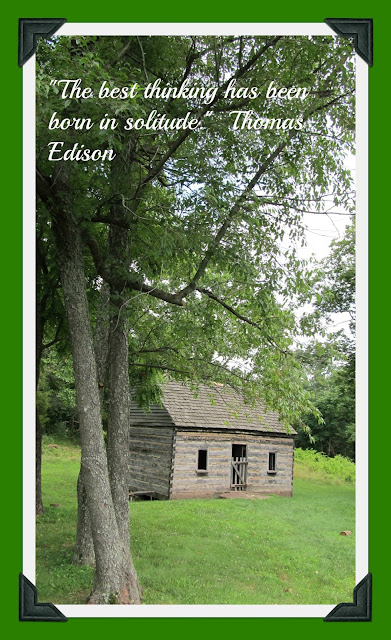 In our electronic world, turning off the gadgets for a time can be profitable for our mind and body. Try taking one day per week away from the computer, internet, social media, and the cell phone. Your mind will thank you.

Share your thoughts about how this is working for you.

What Can We Learn From The Wizard of Oz?

The Wizard of Oz is familiar to all ages and has been broadcast year after year on television to millions of viewers. What can we learn from Dorothy, the Scarecrow, Tin Man, and Lion?

They were all asking the wizard for something they already had.

All these characters asked the Wizard of Oz for something he couldn’t give them.

Why? Because they already had what they were asking for. He merely awarded them with tokens to help them discover the hidden treasures inside them.

Dorothy had to find out she already had the means to get home with her all the time. Glenda, the witch of the north, had to reveal to Dorothy the power of the ruby slippers. All Dorothy had to do was tap and ask.

How many times do we go to God begging and pleading for Him to answer a prayer He has already provided the answer to?

Jesus death and resurrection defeated the power of the devil. For this purpose the Son of God was manifested, that He might destroy the works of the devil (I John 3:8).

As His divine power has given to us all things that pertain to life and godliness, through the knowledge of Him who called us by glory and virtue (I Peter 1:3).

Who Himself bore our sins in His own body on the tree, that we, having died to sins, might live for righteousness—by whose stripes you were healed (I Peter 2:24).

And those who are Christ’s have crucified the flesh with its passions and desires. If we live in the Spirit, let us also walk in the Spirit (Galatians 5:24-25).

This is where renewing our minds comes in (Romans 12:1-2). The more Word goes into us, the more revelation we have about what God has given us through Christ. We find out we already have inside us what we are asking God to give us.

Dorothy tapped her heels and said “there’s no place like home.” When our emotions rise up and tell us lies, all we have to do is tap into the Word and say “I believe.”

On July 4, 1776, Congress officially adopted the Declaration of Independence which voiced the intent of the colonies against the tyranny of King George and the British Empire.
The signers were affixing their names to a document that would seal their fate as traitors should the colonial army lose the war. They believed in what they were doing so much they were willing to sacrifice home, family, health and lives to ensure the independence of the new country.

The struggle of war continued until 1783 with a victory over the superior army of Britain. The Declaration of Independence and the Constitution which would later follow offered Americans protection from enemies and various freedoms such as religion and speech.

Apparently, some think those documents are outdated and should be eliminated or re-written. Others think those freedoms only apply if you are a liberal God-hater. The ruling by the Supreme Court on gay marriage is one example.

Many states voted to define marriage as between one man and one woman but since the liberal activists didn’t like that they pushed to get the Supreme Court to overrule the rights of thousands of Americans and say the votes are worthless. The desire of those states is worthless. Our right to vote is worthless.

The founding documents of our country give me the right to voice my opinion whether liberals agree with that or not. The title of this blog is Navigating Life’s Curves for a reason; because there are things in life and society we need to navigate correctly.

What is liberty? It is the right of a people to oppose a government that is misusing the laws. That's what the Revolution was all about.

It’s time for us to stand up for what is right and be loud enough to be heard. Not in an obnoxious, violent manner the way the liberals do, but in the method granted us by the document adopted on July 4, 1776. We have the right to life, liberty, and the pursuit of happiness. Those things are now being downtrodden by the decay of America.

We can take back the rights of families by calling for a repeal of this outrageous law. We can contact congressional representatives and encourage them to adopt legislation to put America back where she belongs. We don’t have to accept this as final, and we don’t need to shake our heads saying how bad this is and then do nothing about it. We WILL be voting in another year, and hopefully enough people will wake up and vote according to biblical standards and not in favor of whoever is going to give them something for nothing.

Celebrate Independence Day thanking God for this country and the reason people died to found the government of the people, by the people, and for the people.

I Am Not Your Enemy

You can’t get any clearer than Romans 1:18-32 about homosexuality. Those who are parading around celebrating it and mimicking the crucifixion of Christ are ignoring these warnings from God. This is a lifestyle that brings harm to the soul and the body.

Flaunting their sin before God and the world, these blasphemers are saying they don’t care what God says and are making themselves their own god. This is the ultimate height of arrogance.

The Supreme Court made themselves god this week, as well. The Bible says in Romans 1:32 that those who approve of such things are just as guilty as the ones carrying out the act. Jesus said, "Have you not read that He who made them at the beginning made them male and female...for this reason a man shall leave his father and mother and be joined to his wife, and the two shall become one flesh" (Matthew 19:4-5).

Those statements are not filled with hate. They are filled with love for mankind by giving a warning of impending judgement. Sodom and Gomorrah were wiped out to keep this kind of sin from spreading. Christ took God's judgement upon Himself at the cross, so God is no longer judging people in this way. He is extending mercy. He warns people to repent so He can save them from destruction.

But there will come a time when mercy and grace ends, and judgement will come for those who have rejected Christ and His sacrifice for sin.

"Am I therefore become your enemy, because I tell you the truth?" (Galatians 4:16).

I hope and pray eyes will open and hearts will turn toward God and His love. He really does love the world and wants all to know how much!