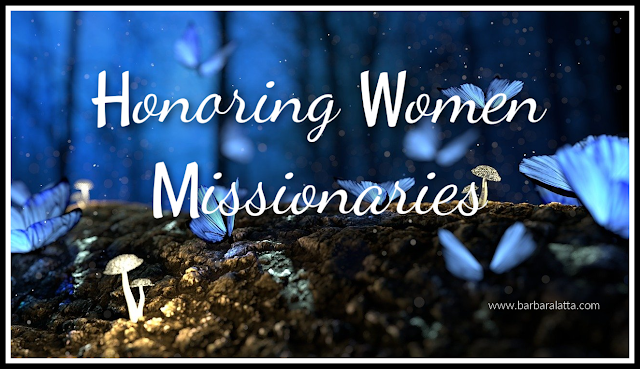 As we approach the end of Women’s History Month, we can honor the legacy of some dedicated Christian women and missionaries. Their sacrifices to spread the gospel of Jesus Christ in places far from their homes can inspire us to grow our own faith.

The Difference Between a Sinful Woman and a Pharisee

Jesus has been invited to dinner at a Pharisee’s house. The table, more than likely, is surrounded by important guests and dignitaries.

Then one of the Pharisees asked Him to eat with him. And He went to the Pharisee’s house, and sat down to eat. And behold, a woman in the city who was a sinner, when she knew that Jesus sat at the table in the Pharisees house, brought an alabaster flask of fragrant oil, and stood at His feet behind Him weeping, and she began to wash His feet with her tears, and wiped them with the hair of her head; and she kissed His feet and anointed them with the fragrant oil. (Luke 7:36-38 NKJV)*

As they recline at the table, their feet are stretched out behind them.

A woman approaches carrying a box carved from alabaster and filled with expensive, fragrant perfume.

She stands quietly behind Jesus. She kneels, breaks the seal on the box, and pours the oil on His feet.

She doesn’t look at the Savior as tears of repentance flow from her eyes and drip on His toes.

As she looks down, her hair flows across her face and touches His ankles. She moves her hands down the strands of hair smoothing the perfume across His feet.

She bends down and her lips touch the feet that trod dusty miles throughout Galilee.

Her actions cause quite a stir among the dinner guests. The host is indignant and starts to doubt the validity of his guest of honor. The Pharisee thinks the man at the table surely doesn’t know who is touching Him or He wouldn’t permit such a display of affection.

Instead of rebuking the woman, Jesus corrects the owner of the house with a parable.

The woman with the alabaster box displayed the ultimate act of devotion and worship because she realized how much she was loved and forgiven.

Her devotion to Jesus superseded the fear of condemnation she knew she would receive by appearing in this room full of men who knew her sins.

The Difference Between the Sinful Woman and the Pharisee 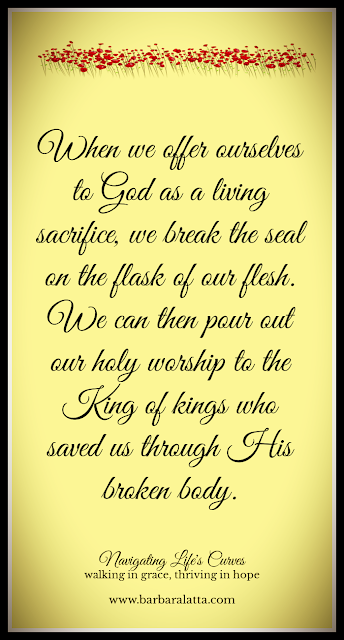 We are All in Debt and Need Forgiveness

Jesus made His point through a story regarding forgiven debts.

But to whom little is forgiven the same loves little. (Luke 7:47).

The truth is Simon the Pharisee’s sins were great also. He was filled with hypocrisy and pride.

He just didn’t acknowledge that he needed forgiveness, so he didn’t receive any.

We all are forgiven much. But our ability to live in the free gift of grace and mercy depends upon our repentance and acknowledgment that we need that forgiveness.

Once the revelation of how much we are loved penetrates our hearts, we will love much too (1 John 4:19).

The broken flask means she opened the seal on the jar. She poured the oil upon Him like the Holy Spirit poured out upon Him after His baptism.

Because the seal of His body was opened at the cross, the fragrance of His adoration toward us flowed out. His sacrifice opened the way for the oil of the Holy Spirit to flow upon us.

The woman in this story didn’t have a name, just like the woman with the issue of blood we talked about on March 4.

But she is so important. It doesn’t matter that we don’t know her name. She gave us the example of an unselfish gift that has lasted for centuries.

Today, Jesus doesn’t physically sit before us even though He is with us through the Holy Spirit. We can’t open a bottle of perfumed oil and pour on His head.

How can we follow this woman’s example? What is our alabaster flask? What is our sacrifice of devotion and worship?

Romans 12:1 NKJV tells us the answer.

I beseech you therefore, brethren, by the mercies of God, that you present your bodies a living sacrifice, holy, acceptable to God, which is your reasonable service.

When we offer ourselves to God as a living sacrifice, we break the seal on the flask of our flesh. We can then pour out our holy worship to the King of kings who saved us through His broken body.

When we believe and follow Him, He says the same thing to us He said to the woman in our story. “Your faith has saved you. Go in peace.” (Luke 7:50)

During Women’s History Month, I feel it is important to remember women like this one. A woman who took a bold step of faith and gave Christ the most precious gift of all—herself.

As Titus 2 women, this is what we are all called to do.

We all are forgiven much. But our ability to live in the free gift of grace and mercy depends upon our repentance and acknowledgment that we need that forgiveness. (click to tweet)

When we offer ourselves to God as a living sacrifice, we break the seal on the flask of our flesh. We can then pour out our holy worship to the King of kings who saved us through His broken body. (click to tweet)

*This incident in Luke is not the same instance when Mary, the sister of Lazarus, anointed Jesus with costly perfume as told in John 12:1-2 and Mark 14:3-9.

In Luke 7:36-39, the woman is called a sinner, whereas, Mary, the sister of Lazarus, was never referred to that way. Adam Clark’s commentary on these scriptures states that the word sinner could mean she was of a heathen country and not a Jew, rather than what some interpret as a prostitute. A person from one of these lands would most probably have an idol worshipping background thus the reference to her many sins.

Is the Proverbs 31 Woman Perfect?

Do you groan every time you read the 31st chapter of Proverbs?

Does that out-of-reach pinnacle persecute your self-esteem?

We read about this woman who appears to have no faults. She works night and day and never makes a mistake. She makes money, she is kind, and she is praised.

The comparison demon tells us we don’t measure up so why try.

But is the Proverbs 31 woman perfect?

4 Lessons of Faith From an Unnamed Woman 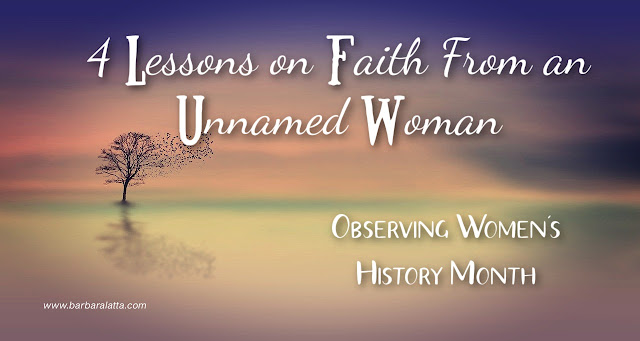 March is Women’s History Month. Each week this month we will explore the lives of women in history or the Bible who have inspired us with their examples.

The Bible gives us the names of many women whose courage and faith blessed generations. But we also find some in Scripture who are not named.