What Does It Mean To Be Created Equal?

The Declaration of Independence states that all men were created equal.

It’s obvious all people on the earth are not equal. Many are enslaved, reduced to poverty, suffer from social injustice and abuse. So where does equality come from and what does it really mean?

The signers of our independence document recognized God as the Creator of all men. As the sovereign Lord, He made mankind in His image.

Each person is born as a human being with the ability to commune with their creator if they so choose.

And that is the key. Choice.

Adam and Eve had a choice and they chose to rebel against God.

That rebellious spirit has been passed on to every human born since that time.

Because of that rebellious spirit, those who choose to continue to disobey God exalt themselves in some positions of authority and inflict oppression on to others.

This is what causes humanity to be in classes of inequality today.

Oppression comes from other people. Dictators choose to inflict domination onto citizens; human traffickers take it upon themselves to think they can own another person because of their own selfish desires; socialism prevents citizens from owning their own property.

The earth is the Lord’s and all it contains, the world, and those who dwell in it (Psalm 34:1).

God created the earth and gave it to the people He created. But He intended that creation to be used for good and not evil. Romans 13:1-4 tell us that God ordained the authority of government because people choose to be rebellious. But because there are evil leaders who obtain high positions, wisdom is required as to how far obedience should go.

The Founding Fathers of America recognized that God is the giver of rights. Life, liberty and the pursuit of happiness is a God-given gift. But because of the selfishness of mankind those rights are denied to parts of the world by ungodly leaders who want to be in charge.

Those of us who live in the United States have been given a gift that most of the world does not have. America has been a light and supportive arm to the nations of the world who have been attacked and oppressed. If that light is put out, how can others be helped? We have a foundation that was built on righteousness and that’s why our enemy, Satan, opposes it.

People are created equal in God’s eyes. Inequality comes from mankind and because of sinful rebellion the rights of equality had to be fought for. That’s what the American Revolution was all about.

How to Live Free of the Grip of Fear

Angels bringing communication from God to saints of old always preceded their message with “Fear not.” While the visual image of a creature from heaven would be a terrifying sight to our natural eyes, God’s reassurance to the recipients of the words tells us He doesn’t want us to be afraid.

But how do we live free of the grip of fear?
Read more »
Posted by Barbara Latta at 7:00 PM 4 comments:

Email ThisBlogThis!Share to TwitterShare to FacebookShare to Pinterest
Labels: 2 Timothy 1:7 why did Adam hide from God, Barbara Latta, How to live free of the grip of fear, Navigating life's curves, Psalm 139:9, Psalm 45:1-2

How Can We Conquer the Root of Rejection?

“Sticks and stones can break my bones, but words can never hurt me!” This often-taunted phrase is a
lie. Words can hurt worse than a physical injury and last much longer. The emotional scars left behind can take years to heal if the hurt is not dealt with properly. Rejection comes in many forms such as bullying from peers or abuse by those in positions of authority.

But we can have a great life in one area and still experience rejection in other areas of our lives and the effects can be just as devastating if left unchecked.

Rejection Isn’t Always Through Abuse
My home was very loving and kind. I didn’t grow up with abuse, foul language, yelling, drugs, alcohol or lack.
But there were times when I felt the ultimate rejection.

I was shy. I didn’t initiate friendships or participation in games and sports; therefore, when teams were formed, I was the last one chosen.

I wasn’t the cute kid who won the little beauty contests. No one ever told me I was ugly, but my ears always perked up when someone else was told how pretty they were. So, my mind said, “You’re ugly.”

I was skinny and was told quite often about my lack of flesh. My mind said, “There’s something wrong with you.”

I worked hard to make good grades and when another student surpassed me, the voices in my head would start again, “You don’t measure up.”

So, do you get my point? I was allowing rejection to form in my mind based on what others were doing or saying.

Rejection can grow a root in our lives if we do not deal with those feelings in a scriptural way. The fruit of that root produces:

The Rejection of Jesus
No one has ever experienced the amount of rejection Jesus faced. In every area of His life, He faced ridicule and abuse in some form.


In of all this rejection, Jesus stayed focused on fulfilling God’s will. As the Son of Man, he had the ability to feel the same emotions we feel; but as the Son of God He remained true to His purpose. He didn’t let the rejection of others sway what He knew He had to do. His spirit overcame His emotions (Mark 14:36). We have the same ability to overcome our feelings by the power of the Holy Spirit (John 16:33).

The Remedy
We can overcome feelings of rejection by:


The ultimate rejection Jesus experienced was rejection by His Father. “My God, my God, why have your forsaken me? (Matthew 27:46).  He did this so we could be accepted. This was the worst thing that had ever happened to Him. For all eternity Jesus had been in union with His Father. Even after He laid aside the benefits of His deity to come to earth, He still had the fellowship with God until His Father had to turn away because of the sin that had been laid upon His Son. Jesus was willing to endure the worst rejection of His life so we could be accepted. That shows us how valuable we are to Him.

Best-selling author and businessman, Harvey Mackay stated, “Most fears of rejection rest on the desire for approval from other people. Don’t base your self-esteem on their opinions.”

Someone else’s treatment of us doesn’t reflect our value. Jesus said we were all worth dying for. That should make all the difference in the world.

Email ThisBlogThis!Share to TwitterShare to FacebookShare to Pinterest
Labels: abuse, aggressiveness, anger, Barbara Latta, Bullying, Harvey Mackay, How can we conquer the root of rejection, Jesus forsaken for our sins, Navigating life's curves 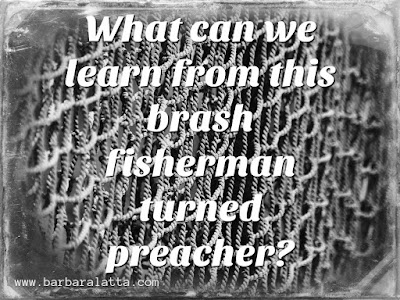 5 Ways to Handle the Offensive Opinion of Others 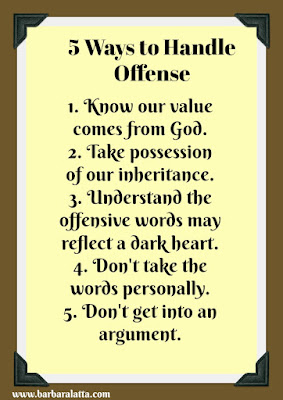 The Bible tells us that words have power. Spoken thoughts can be used for good or harm. Our society has transformed into one in which those who don’t like what you say want voices silenced if words don’t agree with their philosophy. What is offensive to some is labeled hate speech and those who disagree say their critics are the ones who should be prosecuted.

Clicking the remote for the TV or booting up your computer is all that’s necessary to be blasted with someone’s rant or latest offense. Our ears and eyes can become bombarded with negativity and the constant stream going into our minds can have a lasting effect if we are not careful to stop the flow. Even when we think we are not affected, a mood change can be a key we are letting poison control our emotions.

We have the power to flip the switches on electronic devices, but we can’t turn off opinions spouted in our presence whether in the workplace, marketplace or school. Refusing to become offended is a choice we can make, but the power to make that choice requires discipline in the Word of God.

Here are 5 ways we can handle the offensive opinions of others:

The best defense for offense is found in Philippians 1:1, "being filled with the fruits of righteousness which are by Jesus Christ, to the glory and praise of God."

When we allow the Word of God to dominate us the atmosphere of anger will not thrive in our sphere of influence. We can't control other people, but we can control our response to them. When we stand strong and avoid being drawn into negativity, we are growing in maturity and spiritual strength.