How to Cure Brokenness in the Soul

Why do we struggle with regret, condemnation, envy, depression, rejection, inferiority and a host of other negative emotions? 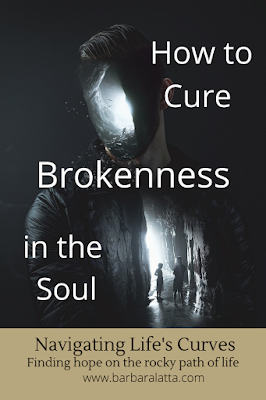 Because of the root of brokenness in the soul.

Our lives began with the blank slate of brokenness. Until a person is born again the spirit is dead and separated from God. The soul (mind, will and emotions) has no hope. God gives us a new nature when we become born into His family through the blood of Jesus. But we can still live as Christians and accept these mental games as truth when we believe the lie about ourselves.

Brokenness doesn’t have to come to us in drastic measures for it to hurt us. A cut finger is broken just like a fractured bone. The cut in the skin may be small, but if left untreated infection can set in and result in blood poisoning. Both the leg and the finger skin are broken and need treatment for healing.

What may be considered small events in our lives can still hurt. The root cause of the pain still needs to be treated so that it doesn’t fester into a poisoned soul. Otherwise, another notch is cut into an already existing wound.

Email ThisBlogThis!Share to TwitterShare to FacebookShare to Pinterest
Labels: Barbara Latta, healing for negative emotions, How to cure brokenness in the soul, Navigating life's curves, renewing the mind

How to Resist Temptation's Attacks 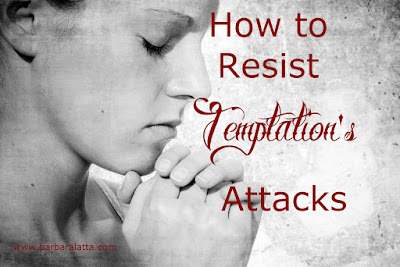 Therefore submit to God. Resist the devil and he will flee from you (James 4:7 NKJV).

We are commanded to resist the devil. God gives us this instruction to protect us from our enemy. If he gets a foothold in our mind, whatever we allow in is harder to uproot once we have entertained the temptation.

Joseph is an example of fleeing from evil. When Pharoah’s wife attempted to seduce him, Joseph ran. He didn’t stand around and debate his thoughts. If he had, the temptation would have overcome him. He was a young, handsome man and a beautiful woman desired him. He was alone and away from home. Who would know?

Joseph did the right thing and he was honored by God later on. He was elevated to the second in command of the nation of Egypt because he obeyed God in that temptation and in other situations.

Temptation can attack in many forms, not just the usual vices we think of as sin. Sin is anything that separates us from God. And the devil isn't prejudiced in who he attacks. He comes after us all.

Temptation begins in our minds. Thoughts can turn into actions and words when we are not diligent to recognize the battle.

When we rely on God's ammunition in His Word, we can resist temptation’s attacks through emotions and negative thoughts such as these:

Read more »
Posted by Barbara Latta at 6:00 PM No comments:

What to do if You've been Hurt by the Church 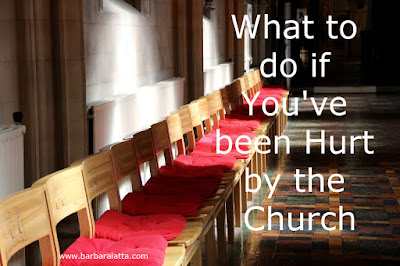 And in other cases, offenses happen in the assembly and members are hurt by each other.

But this is not the way God intended our worship to be.

He is the God of unity. The problem is our flesh gets in the way.

There are solutions and God’s Word is the remedy. Jesus formed the church to be His body on the earth. But He knew He was leaving the administration of worship in the hands of people who would fail from time to time.

What can you do if you’ve been hurt by the church?