The Sermon at the Mall, a Black Friday Allegory - Free Download

Now that Black Friday shopping is upon us, I wanted to share a short story I wrote about this after Thanksgiving event. This year Black Friday will be different as social distancing rules are in place. Most shopping will be online while some stores will remain open with stricter regulations.

I love shopping so the only intention of this story is to remind us to keep our perspective. With number limitations and distance between customers enacted, patience will still need to reign.

I hope you enjoy your week and if you were not able to visit with family and friends physically, I hope you were communicating through technology.

May your shopping, celebrating, and sharing be filled with blessings!

You can download The Sermon at the Mall, A Black Friday Allegory here

Feel free to share your thoughts about your Thanksgiving memories.

3 Reasons We Shouldn't Fear the Future 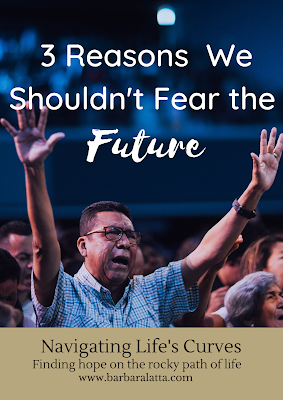 To look at the world’s ills, one could cower in fear of what’s next on the tragedy agenda. Not only have we navigated a worldwide pandemic, we have also endured weather disasters, political stress and civil unrest.

But you know what?

This is nothing new. Since the beginning of time mankind has fought among himself, people have dealt with volcanoes, earthquakes and floods. Nation has warred against nation and strife has not ceased.

Fear is the opposite of faith in God. When we fear, our eyes are on the turmoil around us and not on the Father Who saves us.God’s instructions to His people to fear not appear in the Bible hundreds of times. He knew we would be influenced by the world and events around us and our natural senses would default to looking at tragic or impossible situations. His repetition of this phrase is because we need to hear it so much.

When I was struggling with fear of the future God reminded me of these 3 things.

We shouldn’t live in fear because:

Why have Thousands of Christians Fallen Away from a Biblical Worldview?

Where do our belief systems come from? Why are some people easily influenced by others and willingly follow them into chaos?

Why have thousands of Christians fallen away from a biblical worldview?

Many who call themselves believers have turned away from the purity of the truth of God’s Word and mixed their belief systems with the secular world and other religions. 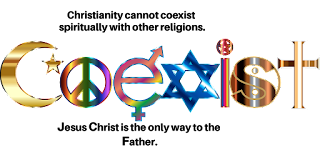 Barna research conducted a poll among Americans who say they go to church regularly. The result of this survey reveals only 17% of adults who claim they are Christian and attend church regularly have a biblical worldview.

What is a biblical worldview? As defined by Barna it is, “believing that absolute moral truth exists; the Bible is totally accurate in all of the principles it teaches; Satan is considered to be a real being or force, not merely symbolic; a person cannot earn their way into Heaven by trying to be good or do good works; Jesus Christ lived a sinless life on earth; and God is the all-knowing, all-powerful creator of the world who still rules the universe today.”

For decades, each generation has fallen further away from God’s teaching and has been influenced by the world system. Their eyes are blinded to the truth because they deny the power of God to fill the emptiness of soul.

The research also identified the following statistics among Christians:

61% agree with ideas among new spirituality

38% are sympathetic to Muslim teaching

These numbers reveal how worldly thinking has infiltrated the church body in such a way as to change attitudes and belief systems—which in turn affects decisions. We are responsible for what we believe. If we fall for the lies of false religion and the secular world system, we cannot blame anyone else. God’s Word clearly admonishes us to remain untainted by the world by renewing our minds to what He says.

We want to be kind to all people, but that doesn’t mean Christians should absorb the doctrines of other religions. We live in the same world as people of other beliefs, but we cannot “coexist” spiritually, as the bumper sticker says. Jesus Christ is the only way to the Father. Period.

Do not be conformed to this world, but be transformed by the renewing of your mind, that you may prove what is that good and acceptable and perfect will of God (Romans 12:2 NKJV).

How do we navigate this curve of thinking that goes against God’s Word? We put more importance on what God says than on anything else. His is the only answer that is true.

When a soul is empty, people seek relief in whatever makes them feel good. False religion and satisfying the flesh can be the result.

Standing true to the Word of God will bring persecution in this world filled with the spirit of anti-Christ, but the rewards we receive for standing firm far outweigh the negative aspects thrown at us.

As we shine our lights in the darkness, the way is illuminated so that others may see the way to Christ. Only then can worldviews be changed.

In the world you will have tribulation, but be of good cheer, I have overcome the world (1 John 16:33).

Posted by Barbara Latta at 7:30 PM No comments:

Email ThisBlogThis!Share to TwitterShare to FacebookShare to Pinterest
Labels: Barbara Latta, Jesus is the only way to the Father, Navigating life's curves, why can't religions coexist, why have thousands of Christians fallen away from a biblical worldview
Newer Posts Older Posts Home
Subscribe to: Posts (Atom)