Lessons from the Parable of the Sower

Planting season is here. Gardeners are plowing fields making soil ready to receive the seeds that will 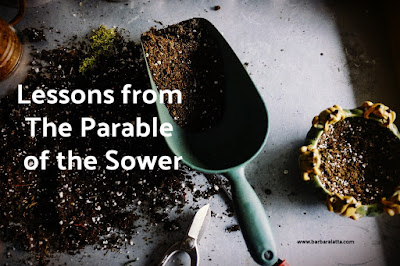 bring a harvest in a few weeks. Water, fertilizer and sunshine will be applied to the ground. Seedlings sprout and soon large plants produce vegetation or flowers for the gardener to enjoy.

In Mark 4:1-20, Jesus told the parable of the sower as an illustration of the human heart. All of us who have been believers for any length of time have probably been in each of these groups at one time or another. The important lesson we learn from this example is what Jesus said after sharing this story with his disciples.

The parallels from the parable are:

7 Ways to Remain Thankful during a Pandemic

But despite my virus weariness, it is still a reality of life. Our lives have changed and there is a tendency (including me) for us to complain about the difference this has made in our everyday routine.

I didn’t want to write a blogpost about something I am weary of discussing,  but I felt this need to be thankful was put on my heart in spite of the germ that is creating chaos across the world.

In everything give thanks, for this is the will of God in Christ Jesus for you (I Thessalonians 5:18 NKJV). Notice this does not say to be thankful FOR all things. God did not cause or allow this virus. These things happen because we live in a fallen world.  But He wants us to be thankful IN all things because He wants us to remember Him no matter what circumstance we find ourselves in. He always has an answer.

Here are 7 ways to remain thankful during a pandemic:


Finding ways to be thankful diverts our attention from the problem to the God who is mightier than all issues we face.

What are some other ways you have found to be thankful during this pandemic? Share your thoughts.

I have many fond memories of my mother and I will always miss her. She passed away in 2018. But one memory (that is not so fond) stands out at the top of the list and it's probably because of the lesson I learned. 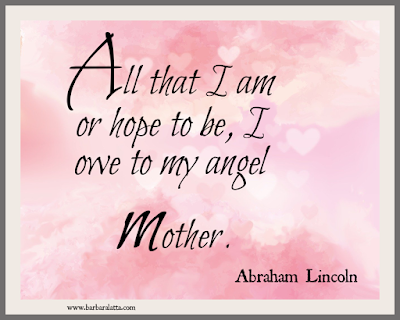 I lived in a small town and could walk to school. After school was dismissed, I went home with a friend without getting permission so my mother did not know where I was. Several hours later when the friend's parents brought me home, my mom was waiting for me with a wooden paddle that had previously had a rubber band and ball attached to it.

While at the time, I did not appreciate what I received, you can bet I never did that again!

From the beginning of time, Mothers have influenced their children to grow up and be the best they can be. Here are some quotes from famous people about mothers. Some are humorous and some encouraging, but all reflect the way a mother can inspire a life.

Read more »
Posted by Barbara Latta at 7:00 PM No comments: