Prodigal son or older brother: Which one am I?

The story of the Prodigal son is widely used in Christian and secular circles. Children who stray from
home are often referred to as prodigals. But in our spiritual life, many of us can probably say we have been each of these brothers at one time or another.

Which son am I?


We are born into the family of God when we accept Christ as Savior and Lord. But that doesn’t mean we will never sin again. When we do sin, we can feel that we must clean ourselves up before we can approach God. Like the younger son, I know how this feels. I have felt unworthy to approach God after a sin or mistake. I wouldn’t pray or read my Bible for a time because I felt condemned. But the condemnation didn’t come from God or His Word. It came from my conscience that knew something was wrong. But when realization of Romans 8:1 enlightened my mind, I knew my Father was waiting to embrace me with His love.

This revelation changed the way I approached the Throne. Instead of running away when we sin, the first thing we should do is run back to the outstretched arms of God. We shouldn’t have to wallow in the pigpen of condemnation before realization hits.

But I have also been the older brother. Self-righteous attitudes formed when I judged another’s sin. I have been a good Pharisee.

In the story in Luke 15:11-32 we can see the characteristics of both the sons:

Neither of them approached their father based on the parental love they were shown.

Despite the way the boys treated their father, his reactions to their behavior revealed his godly 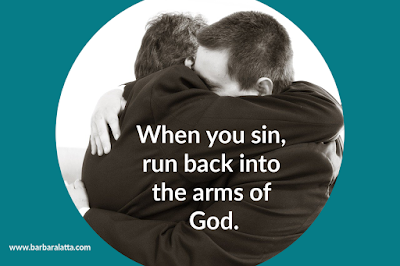 character and show us God’s character toward us:

God’s desire if for us to know how much He loves us. Works and service come as a by-product of the relationship, not a way to obtain a relationship. We can learn much about our heavenly Father through the story of the prodigal son. In reality, they were both prodigals because they strayed from the relationship with their parent.

So, which son am I? If you see yourself as one of these children, no matter which one it is, please know that your Father is looking down the road and waiting to embrace you and fill you with the gifts He has already provided.

What insights have your gained from this story? Share your thoughts.

Prodigal son or older brother – which one am I? (click totweet)

Instead of running away when we sin, the first thing we should do is run back into the arms of God (clickto tweet)