3 Ways to Wield the Sword of Redemption

by Barbara Latta
In New Testament days, the Roman army was an institution to be feared. Everywhere they marched,
these soldiers conquered. To resist them meant certain death. They were heavily armed, trained, and disciplined. They had at their disposal an arsenal of weapons. Among these were various types of swords.
A heavy double-edged sword, too large and heavy to use in actual fighting, was a training tool. This strengthened the soldier’s muscles so that when they wielded their swords in battle they did not become fatigued and weak.
The spatha was a long sword used in the Roman cavalry and gladiator games. A soldier could swing this instrument of death with a long reach while still on horseback.
But the gladius was the weapon of the foot soldiers. With a double edge and triangular tip, its reputation was as the sword that conquered the world. Just the sight of this sword and the decimation left behind would strike fear in the hearts of an enemy. It was used in close contact because it could penetrate the body between chinks in armor, remove limbs and slice throats.
Gladius is the Latin term for this type of sword which in Greek is machaira. And this Greek word is the term Paul used in Ephesians 6:17 when he refers to the sword of the Spirit. The deadly sword Paul tells us to use against our enemy. The machaira of the Spirit. The words of God that decimate our enemy. The devil cannot stand against it. The Word strikes fear in this fallen angel because he knows he has no power against those razor-sharp edges. The sword that conquered the spirit world is the sword of redemption. 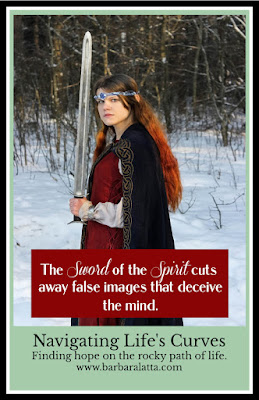 Jesus defeated satan when He went into hell and took away the keys to death. Redemption cannot be undone.
Our use of machaira against the enemy of mankind reminds the devil of this. That’s why he fights so hard against our knowledge of the Word. My people are destroyed for lack of knowledge (Hosea 4:6).
When we know what redemption did for us, we hold the power, the enemy does not. It is God’s power in our hands, His sword, and we can eliminate any threat because this weapon strikes behind the devil’s armor—his lies.
Here are 3 ways to wield this mighty sword of redemption:
Roman soldiers won battles because they were heavily armed, trained, and disciplined. When we arm ourselves with the Sword of God, train ourselves in His Word, and discipline our souls to only listen to the truth, we are a force that strikes fear in the spiritual wickedness in high places.
We are victorious because our Leader has already won the war for redemption. Our fighting takes place in the battlefield of the mind.
Truth conquers lies and the Sword of the Spirit cuts away the false images that deceive the mind.
If you abide in My word, you are My disciples indeed. And you shall know the truth, and the truth shall make you free (John 8:31b-32).
The truth we know about redemption makes us free.
How do you use the Sword of the Spirit? Share your thoughts.
3 Ways to Wield the Sword of Redemption (click to tweet)
When we know what redemption did for us, we hold the power, the enemy does not. (click to tweet)
Posted by Barbara Latta at 8:00 PM