How to Trust God's Faithfulness Instead of Relying on Emotions 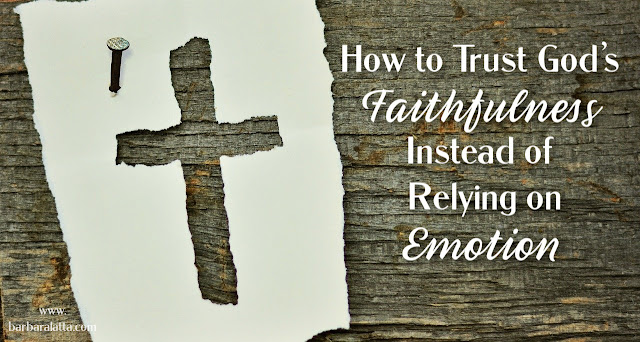 
No rain for three years.

The woman looked out the door at the cloudless sky and back at the hard, dry ground. No one could remember the last time a stalk of wheat had grown out of the soil. A spear of hopelessness stabbed her soul. She wasn’t so concerned about herself, but she didn’t want to watch her child die of starvation. Her husband perished, now so did the food.

How could she trust God’s faithfulness? Her emotions were as dry as the ground outside.

The woman reached toward the bin of flour. Only a handful left, and just enough oil to make a paste. One more meal and death would win.

All she knew to do was what she did every day. She went outside and picked up sticks for a fire.

As she did so, a shadow passed between her and the ground. She looked up and saw a stranger.

“Bring me some water,” he said.

She stared at him for a moment. Didn’t this man know how scarce water was? No rain in ages made water more valuable than gold. But something within her heart urged her on.

She walked toward her house for a cup and heard the man’s voice ask for more. “Also bring me some bread.” Now he’s done it. Not even enough for herself and her son and this man wants to take it.

Then she remembered the message she received from Yahweh. He had told her to provide for someone (1 Kings 17:9). She decided to test this man to see if he was the one.

“I don’t have bread, only some oil and flour, barely enough for me and my son. After that, we’ll die because there is no more.”

Elijah the prophet answered her, “Do not fear, make me a cake first and then there will be some for you and your son. The flour and oil will not run out until the Lord sends rain on the earth.”

So she went away and did according to the word of Elijah; and she and he and her household ate for many days (1 Kings 17:15 NKJV).

The story of the widow of Zarephath reminds me of the hymn, “Greatis Thy Faithfulness.”

The great Jehovah never failed throughout the Bible and He doesn’t fail now. This woman listened to the word of the prophet Elijah. Because she obeyed what she heard, she saw God provide for her and her son. Later when the boy was severely sick and died, she had opportunity to be afraid and doubt. But the widow remembered what the Lord God had done for her in the past and she called out to the prophet. Her child was restored to life.

The world is dark. When all we focus on are the tragedies and evil this planet produces, our souls can fall away from hope (Proverbs 13:12). This widow faced a famine so severe, without supernatural intervention she and her son would die.

But the King of kings is full of light and hope.

So why do we see the famine instead of the provision as the widow woman did at first?

Because we look elsewhere. The situations we face are exalted above the faithfulness of our Father. She saw the dry ground and the empty bin. We feel dry, hopeless hearts and empty souls because of life’s pain and lack.

We know God is big, but we see His greatness as out in the vast beyond instead of here and now with us.

As the song says, “As thou hast been thou forever will be.”

He was before all else began and it is his power that holds everything together (Colossians 1:17 TLB).

I will worship toward your holy temple, and praise Your name for Your lovingkindness and Your truth; for You have magnified Your word above all Your name. (Psalm 138:2 NKJV).

God’s Son shines out with God’s glory, and all that God’s Son is and does marks him as God. He regulates the universe by the power of his command (Hebrews 1:3 TLB). 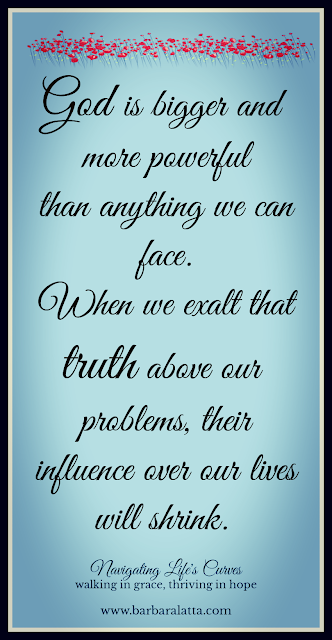 Psalm 138 says His Word is above His name. God cannot go against His word or the universe would explode. If the faithfulness of God’s power holds the universe together, why can’t we trust Him to hold us together?

The widow of Zarephath listened to God’s words through Elijah. She stopped seeing the famine and saw the power of provision.

Read portions of scripture that tell us how powerful God is. Genesis chapters one and two show us the power of creation; Revelation chapter one depicts the majesty of the risen Christ.

Listen to praise music. This sets the tone for worship and puts our mind on God.

Rehearse the ways He has been faithful in the past. Perspective changes to the promises of God instead of the limitations in our minds.

Some of the blessings I have received through my Lord’s dependability have been:

Above all, the Savior is faithful to forgive.

The Father is devoted to us in everyday life. His faithfulness does not depend upon our emotions.

A Titus 2 woman instructs what is good (Titus 2:3). When we teach the goodness of God, we build a community of women strong in the Word who can stand against adversity. We construct a path for the younger ones to follow and equip an army of future believers through the children.

God is bigger and more powerful than anything we can face. When we exalt that truth above our problems, their influence over our lives will shrink.

What are some ways God has shown His faithfulness to you? Share your thoughts.

If the faithfulness of God’s power holds the universetogether, why can’t we trust Him to hold us together? (click to tweet)

Email ThisBlogThis!Share to TwitterShare to FacebookShare to Pinterest
Labels: Barbara Latta, How to trust God's faithfulness instead of relying on emotions, I Kings 17, Navigating life's curves, Titus 2 woman, widow of Zarephath