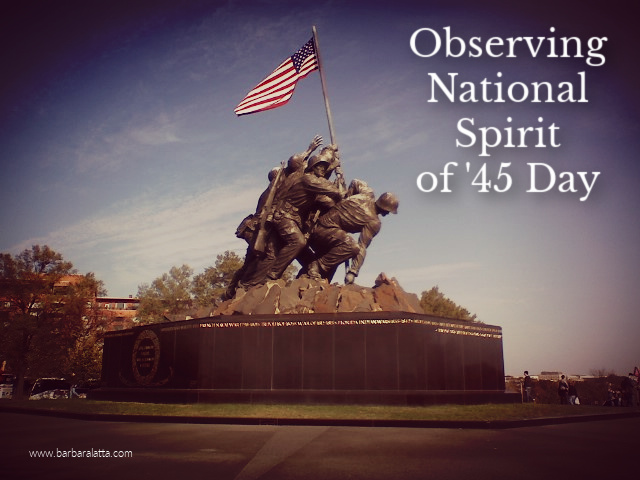 The second Sunday in August is recognized as National Spirit of ’45 Day.

The era of the 40’s which comprised those who fought and lived during World War II has been designated as the Greatest Generation. But what brought about this illustrious title given to those who lived in a segment of time? 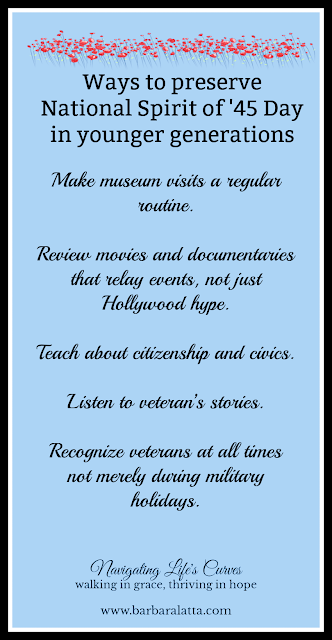 The world was in turmoil, countries were devastated, and survival depended upon winning.

No sacrifice was too great to ensure that our freedom and safety remained intact.

The people on the home front made sacrifices too. They gathered rubber tires, newspapers, and other supplies while living with food and gasoline rations without complaint.

There was a spirit of unity. The population of the country was behind the war effort. Celebrities encouraged the purchase of war bonds to fund the war.

Heroes were applauded and given almost godlike status.

History is filled with stories of heroism we don’t read about in books or newspapers.

Military members that came home didn’t parade their medals, instead they mourned their comrades who remained buried on the battlefield. (Not to infer those of other generations didn’t.)

Women were willing to take on new roles by working in factories to produce military materials.

I was born after this time, but my childhood was filled with reading and hearing stories on TV, movies, and books about the conflict that tore the world apart. No sacrifice was considered too costly to defeat Nazism and Imperialism. Stories of torture and the deaths of prisoners of war made us weep.

And we saluted those who served. We looked at the Stars and Stripes and said the Pledge of Allegiance with pride. The cost of why this banner still flew never left our country.

Today few veterans of Greatest Generation are left. If we know some, we can show our appreciation to them by visiting and finding out what they may need.  If we are not personally acquainted with service members of this era, we can keep this spirit of hard work and sacrifice alive by continuing to educate the younger ones about what freedom really means.

The Spirit of ’45 WW II Wall of Honor Project to commemorate the 75th anniversary of World War II was scheduled for August 2020 but the covid* outbreak forced a revision. You can still read more about it on their website.

As these heroes leave us one by one, it will be up to the current and future generations to maintain the history of our country. This is one area Titus 2 women can help with remembrances of our families and nation.

May we never forget the Greatest Generation. The legacy from 76 years ago can teach us more about patriotism as we learn the truth about a time America experienced “a date which will live in infamy.”

How can you observe National Spirit of ’45 Day? Join the conversation and share your thoughts.

*I don’t give this virus credence by capitalizing it!

How can you observe National Spirit of ’45 Day? (click totweet)