What Do the Seven I AM Sayings of Jesus Mean to Us Today? (Part One) 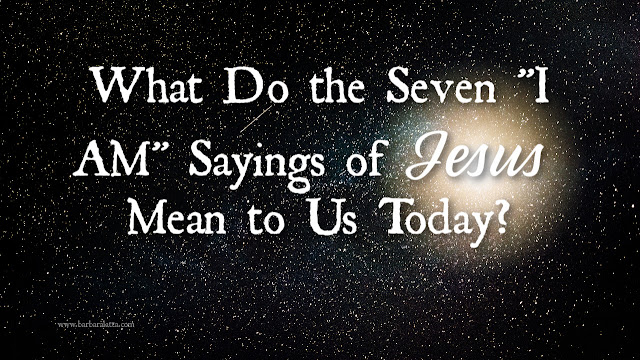 Who would think they needed 600 men to arrest one? Only those who were intimidated by the power of the great I AM.

In the Garden of Gethsemane, the chief priests and Pharisees came to arrest Jesus and brought a crowd with them. The King James Version uses the word band. Other versions state multitude or detachment. But the word is translated from the Latin speira (Strong’s 4686) and denotes a Roman military cohort of 600 men. This shows what a threat Jesus was to the religious establishment.

But no matter how many they had with them; Jesus couldn’t have been taken had He not submitted. God’s Son could not be contained by humans.

Most translations add the word, “he” to Jesus’ statement. But the word “he” is in italics to denote it was added for clarification. What Jesus actually said was, “I AM.”

Those two words caused over 600 men to fall backward, which included Judas, the betrayer.

They fell flat on their backs due to the power before them. They saw Jesus heal the ear Peter cut off (Luke 22:51). Yet they were so hard-hearted none of these actions swayed the crowd. All they cared about was eliminating the threat to their power.

You want to arrest I AM? Except for the heartbreak of knowing what lay ahead for His Son, this may have been one of those times the holy Father laughed at mankind’s attempts.

“He who sits in the heavens shall laugh; The Lord shall hold them in derision.” (Psalm 2:4 NKJV)

What is the deeper meaning of I AM? In His teachings Jesus gave us seven word pictures to reveal what I AM means to our lives. This week we will explore the Bread of Life and Living Water. Next week we will cover the other five.

The Hebrews were fed supernatural bread that met their physical needs for 40 years. This bread contained every nutrient a human body needed for health and sustenance. Once they entered the promised land and had opportunity to grow and harvest their own food, the manna ceased. That bread’s purpose ended.

Jesus gives us spiritual nourishment that connects us to God. This provision is also supernatural but does not come to an end the way manna did. The bread from heaven could be considered comfort food in that our soul is satisfied, and our body can receive nourishment from heavenly food.

“Man shall not live by bread alone, but by every word that proceeds from the mouth of God.” (Matthew 4:4). God’s Word can sustain us where physical food can’t.

Men have searched for a fountain of youth for centuries. They searched for water from the earth to prevent bodies from the effects of aging. But there is no physical fluid that can stop the decay of humanity because sin is the culprit that brought death.

These explorers searched for the wrong kind of water. 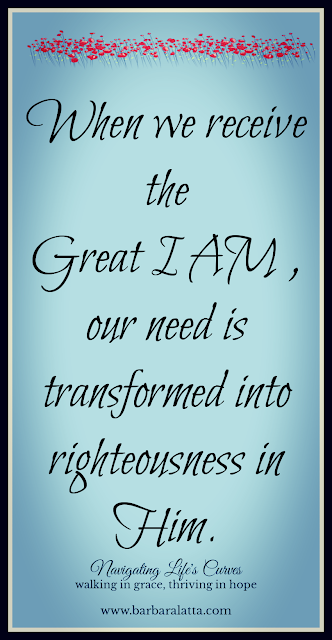 e offered this woman water that would sustain her for eternity. And when she referred to the coming Messiah He told her, “I who speak to you am He.” Here “he” is also italicized indicating it was not in the original manuscript. What He said to her was, “I AM.”

On another occasion Jesus offered living water to the people.

“On the last day, that great day of the feast, Jesus stood and cried out, saying, ‘If anyone thirsts, let him come to Me and drink. He who believes in Me, as the Scripture has said, out of his heart will flow rivers of living water.’” (John 7:37-38)

The refreshing water we drink to cool our throats will only quench thirst for a limited time. Living water sustains, refreshes, and cleanses without end. We always want more, but not because we are not satisfied, but because the flow is so good. He refreshes our souls and washes away the toxins of discouragement and doubt.

I AM means there is no need unfulfilled. No provision not met. Those two words cover it all.

But for I AM to benefit our lives, we must come to Him.

We are I NEED.

And when we receive I AM, our need is transformed into RIGHTEOUSNESS in Him.

Whatever we face today, tomorrow, or in the far-reaching future, He has given us everything.

What does I AM mean to your life? Share your thoughts.

Jesus as I AM means no need is unfulfilled. Noprovision not met. Those two words cover it all. (click to tweet)

Posted by Barbara Latta at 6:30 PM

Email ThisBlogThis!Share to TwitterShare to FacebookShare to Pinterest
Labels: Barbara Latta, I am living water, I AM the bread of life, Jesus arrested, Navigating life's curves, Samaritan woman, What do the seven I AM sayings of Jesus mean to us today