Why Did Moses Put a Bronze Serpent on a Pole?

While in the wilderness, snakes slithered among their legs and bit them because of their worthless words and accusations against God and Moses. They dropped in death like stones on the desert floor.

God told Moses to make a bronze serpent and put it on a pole and those who looked at it would be healed of the venom.

Then the Lord said to Moses, “Make a fiery serpent, and set it on a pole; and it shall be that everyone who is bitten, when he looks at it, shall live.” (Numbers 21:8 NKJV)

Why put a snake on a pole?

I used to wonder how looking at the creature that bit the people could cause them to be healed. Why not cause them to look to God?

But in imagery, they were.

Jesus said in John 3:14-15, And as Moses lifted up the serpent in the wilderness, even so must the Son of Man be lifted up that whoever believes in Him should not perish but have eternal life.

That’s when the light came on. The serpent was on the pole, the way Jesus was on the cross. He was crucified and sin was laid upon Him and crucified with Him. The power of sin died. 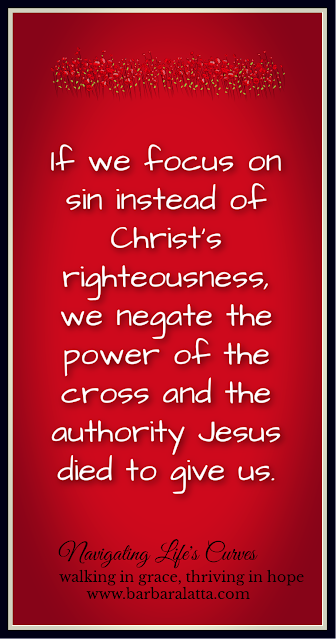 When people looked at the serpent on the pole, they viewed the very thing that was killing them as dead.

That’s when they were healed. The serpents had no more power over the people when they saw their enemy as cursed and dead.

If we focus on sin instead of Christ’s righteousness, we negate the power of the cross and the authority Jesus died to give us. We can be born again, but not live in victory.

Sin was crucified. This version of Romans 6:6 from the Complete Jewish Bible paints a more vivid picture of the cross for us.

We know that our old self was put to death on the execution-stake with him, so that the entire body of our sinful propensities might be destroyed, and we might no longer be enslaved to sin (Romans 6:6 CJB).

The image of the serpent on a pole portrayed the snake’s execution so it could no longer harm the people. Sin was executed on the cross, so it has no more power over us (unless we let it).

The Hebrews were judged for their complaining because under the Old Covenant sin was judged to stop its spread. Under the New Covenant, Christ was judged for all our iniquity, so we are no longer punished by God for each transgression we commit. We are forgiven by the blood of Jesus.

The only sin a person is judged for under the New Covenant is rejecting Christ. That is what sends people to hell, not individual sins.

But just because we are forgiven doesn’t mean we should treat sin lightly. Sin hardens hearts. A hard heart can’t hear God or obey Him. A hardened heart can’t resist the devil.

As we approach Good Friday and Resurrection Day, we can look to the cross in faith and take this time to reflect on the depth of our redemption.

The execution stake killed the serpent of sin.

As we approach Good Friday and Resurrection Day, we can look to the cross in faith and take this time to reflect on the depth of our redemption. (click to tweet)