America's Battles are Not Legislative, They are Spiritual

America’s Battles are Not Legislative, They are Spiritual

An astounding landmark decision by the Supreme Court this week has overturned Roe v. Wade.

Of course, this doesn’t mean abortions will stop, but that these decisions will be reverted to individual state’s authority. Before this decision was even handed down, some states fought frantically to instill legislation to murder babies at any time even after they are born. And other states can pass laws to prevent abortion availability within their borders.

But this is not merely a legislative battle; it is a spiritual battle.

This weekend we celebrate the independence of America from the rule of a tyrannical king in Great Britain. Ironically, we have leaders in power now who threaten the citizens of this country with tyrannical policies.

The first right given to Americans in the Declaration of Independence is the right to life. The framers of our government understood that life is given by God, not man.

I think it is fitting that this Supreme Court decision was handed down on the calendar close to our Independence Day. What better time to declare that everyone has the right to live?

This quote from John Quincy Adams was written later in his life. Perhaps he foresaw the future when a republic formed to be ruled by the people would be ruled by ungodly lawmakers.

Ask the Declaration of Independence and that will tell you that its authors held for self-evident truth that the right to life is the first of the unalienable rights of man [and] to secure and not to destroy [that right] governments are instituted among men.

Governments are supposed to protect life, not take it.

John Witherspoon, a signer of the Declaration, acknowledged the right to life as given by God with this statement:

The struggle for American independence was due to unrighteous laws enacted against the colonists by King George III. We stand against ungodly laws now, not with muskets, but with a sword—the Sword of the Spirit.

We are in a spiritual battle for the life of our country. Not just about abortion, but about all rights. Because this country was founded on the principles of the Bible and satan doesn’t like that. He sows seeds of division because America has been a light to the rest of the world since our inception. 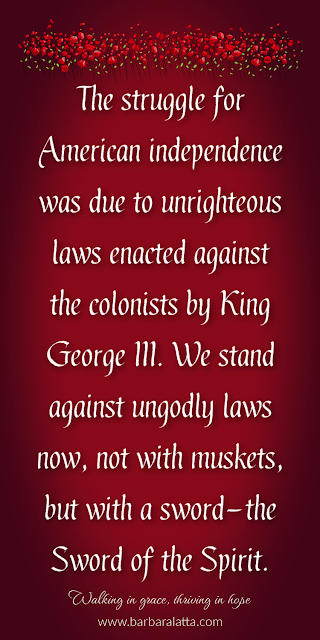 We have produced missionaries, churches, education, inventions, medical advancements, and given aid to other countries when needed. All this was because the wisdom from God was instilled into people who stood for truth.

What better way to take down a nation whose motto is “In God We Trust,” than to divide with hostility, irrational beliefs, and murder?

The Revolutionary War was fought to gain independence and live in the unalienable rights bestowed upon mankind by God. Our resolution is to keep those rights, not only for those of us who live now, but also for future generations. We do that by going after the true enemy—the devil. He is the one behind all the violence and hatred permeating America.

Christ died and rose again to release us from sin and the curses that came with the fall. The identity He gave us was about knowing how to live in that liberty.

We can stand for every aspect of life by:

Jesus told His disciples, “Upon this rock I will build My church; and the gates of Hades will not overpower it.” (Matthew 16:18 NASB)

The gates of hell will not prevail against the church (meaning the collective body of believers) as long as we stay connected to our Source. The fight for America is a spiritual battle.

Grace and peace be multiplied to you in the knowledge of God and of Jesus our Lord, as His divine power has given to us all things that pertain to life and godliness, through the knowledge of Him who called us by glory and virtue, by which have been given to us exceedingly great and precious promises, that through these you may be partakers of the divine nature, having escaped the corruption that is in the world through lust. (2 Peter 1:2-4 NKJV)

May this Independence Day bring to your attention the great freedoms we have. They are truly worth fighting to keep.