Recognizing and Giving Thanks for the Contributions of Military Veterans 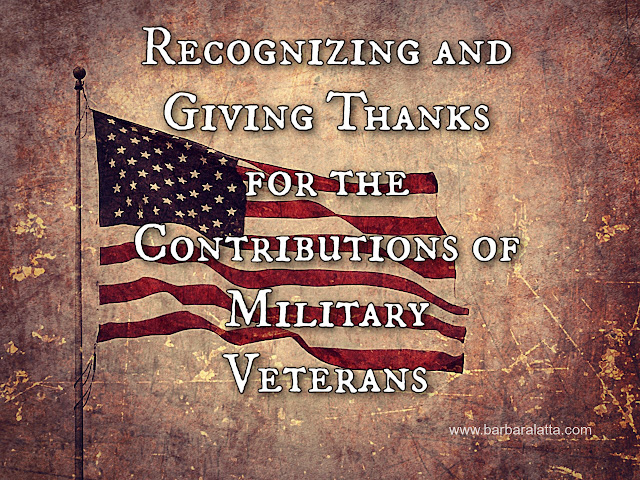 During this Thanksgiving season in America, we focus on the brave souls who traversed a turbulent ocean voyage to seek a new life of freedom in an unknown land.

The Pilgrims were willing to withstand the adversity of months at sea and the hardships of building a community from scratch because their desire to worship God in freedom was worth the price to them.

The people who settled our land laid the groundwork for the benefits we enjoy today. Our military members endure hardships for the sake of protecting those benefits.

A veteran is a person who has or is now serving in the United States military. As a wife and mother of veterans, I know the sacrifice families endure through separations and the anxiety of not knowing what the loved one may be facing in their deployments.

I have had the advantage of visiting military bases across the United States and many in other parts of the world through travel with my husband during his deployments and through his work as a civilian contractor.

At this time, we are positioned at Camp Humphreys, South Korea. While in this country we have visited several bases on the peninsula including the Demilitarized Zone that separates North and South Korea.

Recently, Kim Jong-Un the leader of North Korea, launched missiles toward Japan and South Korea as a message of what he thinks of his own superiority. I say all that to reinforce the need not only for gratitude toward our military, but also to keep them in our prayers.

Servicemembers deploy all over the world. Some are in places we may never have heard of. Some do jobs we will never know about. Some die without our knowledge. Thousands have paid the price in former wars.

We shouldn’t take our liberty for granted. God gave us the right to defend our nation against evil assaults that threaten our principles.

Blessed be the Lord my rock, who trains my hands for war, and my fingers for battle. (Psalm 144:1-2)

Please remember to thank veterans for all they do, and please do exercise your right to vote. Like the Pilgrims who endured hardships to establish the fundamentals of our freedoms, these military members have fought and died to protect that foundation.

Posted by Barbara Latta at 5:00 PM