Flashbulbs popped and applause was spontaneous as the seven Mercury astronauts were introduced to the world by NASA on April 9, 1959. Never before had the country endeavored to complete such a feat as putting a human being into space. These men were instant celebrities. 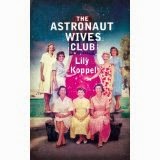 But so were their wives.  In The Astronaut Wives Club, Lily Koppel delves into the behind the scenes lives of the women married to the spacemen. From Mercury to Apollo, ordinary housewives, some with no education beyond high school, were thrown into the spotlight and expected to be the perfect wife and mother. Supporting each other, they formed the club that would keep them bound to together even decades after the space program was over.

The public’s expectations went beyond normal as they were forced to thrive in the light of high society, husband absences, and the politics of NASA. Putting on a brave face amidst the threat of your husband not returning from space was the ultimate goal. LIFE magazine’s contract to follow their every move made this the first “reality” show. They were always “proud, happy, and thrilled.”

The stresses of putting on the façade of perfection while everything was falling apart at home took its toll on more than one victim. Chain smoking, heavy drinking, and tons of tears were the diets of the club. And then there was the task of hiding things from NASA that could separate a spaceman from his job. What was Marge Slayton’s big secret that would get her husband, Deke, fired from the space program? And why was Marilyn Lovell afraid for NASA to find out she was pregnant with their fourth child before Jim’s first Apollo flight? What about those Cape Cookies they had to put up with? (It wasn’t a chocolate chip recipe).

The Astronaut Wives Club is a good read for those who followed the space program or want to know more about the ins and outs of NASA family life.

What do you think about this book? Do you have another one you would like to recommend?
Posted by Barbara Latta at 1:44 AM