Love At Any Cost

Julie Lessman's first book the the Heart of San Francisco series brings Texas to the California coast. Cassidy McClare is a steer roping cowgirl whose heart has been trampled on by a fortune hunting business man. But when visiting her cousins, she encounters Jamie McKenna and  her will power to resist another "pretty boy" is tested. 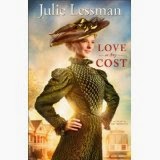 A street rat who worked his way up through college and law school to try to better himself and take care of his mother and sister, Jamie McKenna has vowed to marry money to escape the hovels his family has had to endure. But when he meets the McClare from Texas his heart is lassoed by a woman unlike any he has ever met. Can he prove to her he is not after her fortune?

Julie Lessman captures the early 1900's atmosphere of San Francisco's Nob Hill and the contrast of those trying to survive the slums of the Barbary coast. She entwines the story of a girl full of passion and faith in God with a romantic element that stays heated and keeps you guessing.

This book is available at Amazon.
Posted by Barbara Latta at 3:10 AM