What are the Ramifications of New York's Change in Abortion Laws?

The news coming out of New York in the past week has been shocking and alarming. The 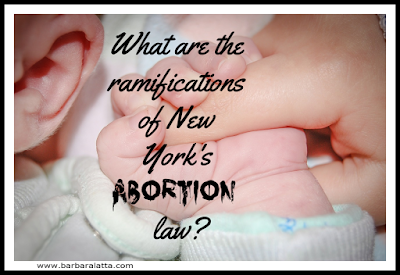 Reproductive Health Act was voted on and passed and Governor Cuomo signed it into law on January 22, 2019.

The fact that New York proposed and voted on this law was due to their fear that Roe v. Wade would be overturned because we now have a president who is more forceful and outspoken against abortion than any of his predecessors.

So what does this law really mean and what will it allow?

By referring to this law as reproductive health care makes it sound so much better than calling it the murder law. The wording allows for generalities that can be interpreted according to opinion.

Economic and social conditions can be used to classify the choice to kill the baby as “health reasons.”

Even if a doctor classifies an unborn baby as “not viable after birth” doesn’t mean the infant will die.

When this bill passed, the legislative session in New York actually applauded and celebrated.
Landmarks and buildings were lit up in pink to celebrate the right to commit murder. Similarly, the ancient Romans celebrated when Christians were thrown to the lions.

The murder of babies for profit or convenience is not a new philosophy.

Then the king of Egypt spoke to the Hebrew midwives…and he said, “When you do the duties of a midwife for the Hebrew women, and see them on the birthstools, if it is a son, then you shall kill him; but if it is a daughter, then she shall live.” (Exodus 1:15a, 1:16).

Then Herod, when he saw that he was deceived by the wise men, was exceedingly angry and he sent forth and put to death all the male children who were in Bethlehem and in all its districts, from two years old and under (Matthew 2:16a).

He burned incense in the Valley of the Son of Hinnon, and burned his children in the fire, according to the abominations of the nations whom the Lord has cast out before the children of Israel (2 Chronicles 28:3).

You have slain My children and offered them up to them by causing them to pass through the fire (Ezekiel 16:21).

No matter what the law says, God’s Word is the final authority. He commands us to stand against evil.

Woe to those who call evil good, and good evil; who put darkness for light, and light for darkness; who put bitter for sweet, and sweet for bitter! (Isaiah 5:20).

Feel free to leave your thoughts in the comments section below.

Posted by Barbara Latta at 9:41 AM