How Do We Walk in Love in a World Filled with Hate?

The Fruit of the Spirit – Love 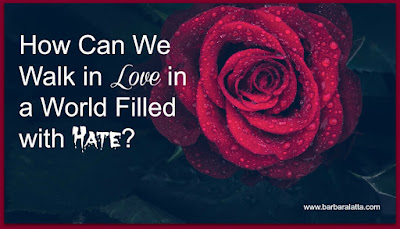 How do we walk in love in a world filled with hate? Die to self.

That’s one thing Lucifer didn’t do. He exalted himself bringing hate and evil into the world. Ever since Adam and Eve gave in to the temptation to exalt themselves in the same way, selfishness has dominated fallen mankind. And love cannot be shown when self is in the way.

How do we die to self?


Put God first. Only then can we put others needs before our own.

During World War II, the ten Boom family of Holland dedicated their lives to procuring safe houses for Jews who were being persecuted and hunted down by Nazis. A room behind a false wall gave a hiding place to protect the Jews who were running for their lives.

Everyone of the ten Boom family, except Corrie, perished because they chose to put others first. While in prison, Corrie and her sister, Betsy, were able to bring other women to know Christ despite the dire circumstances they were living in.

When she shared what she had learned in the prison, Corrie said, “There is no pit so deep that God’s love is not deeper still.” 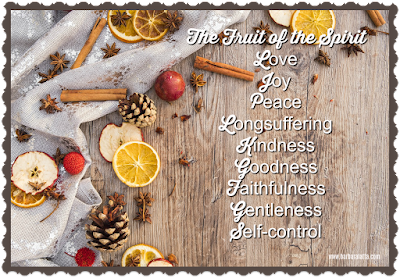 Only the Holy Spirit can produce that love. And when we surrender to Christ, that same Spirit
indwells us and puts his attributes in us.

Notice the verse says fruit as singular and not fruits. While there are nine different qualities listed, they are all one gift given at the time the Spirit comes to live inside us. Because the Spirit of God doesn’t just have all these traits, He is all these traits. This is the personality of the Spirit who lives within us.

Daily life can challenge our relationships. Sometimes we fail. We call out to God to help us and give us more love or joy. But if we realize all those traits are already given to us in our spirits, we can see more clearly how to draw upon them.  The fruit doesn’t come and go with our emotions. We may pick and choose which attribute to use, but the same fruit is always there.

Our soulish realm is where we fail. Because our minds get in the way, we think we don’t have this fruit and we must keep asking for it.

When I was very young, my grandparents lived in a house out in the country that had a well for water. A bucket was tied to a post at the top of the well cover and if you wanted water, the bucket had to be dropped and water scooped into it and before it was brought back to the surface.

The same is true in our spirits. We lower the bucket by digging into the Word and scooping that Word into our minds to drink so we can exhibit the gift that has already been given to us. The water in my grandparent's well was always there, but if we wanted some, someone had to lower the bucket and get it.

Let nothing be done through selfish ambition or conceit, but in lowliness of mind let each esteem others better than himself. Let each of you look out not only for his own interests, but also for the interests of others (Philippians 2:4-5).

Putting God first will result in putting other people first, just like the ten Boom family did. We may never be put into the same situation this Dutch family was in, but we can still let the love of Christ shine through in everything from small to great.

In family life, we can defer to our spouses and children to allow their needs or wants to be met first. I can’t say I have always done this, but when I have the reward of seeing that happy glow on faces was worth whatever time or comfort I gave up.

My husband supports my writing efforts, even though writing is not one of his interests. He has used some of his vacation time from work to go to writing conferences with me just so I wouldn’t have to go alone. He put my needs above his own even though there wasn’t a lot for him to do while I was in meetings. He supports the time I spend writing and never says anything about the money I spend learning the craft. He truly shows the love of Christ as in Ephesians 5:25. 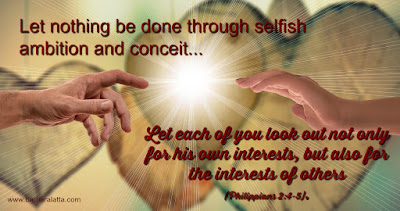 When my boys were small, they would want to play ball in the yard. I would look at work that needed to be done in the house, but now I am glad I did go outside and play little boy baseball while they ran homemade bases across the yard.

Deferring to unpleasant people is more difficult than putting our family members first. I’ve seen people in buffet lines cutting in front of others to get the last piece of chicken or pie as if they would die of starvation if someone else got there first. Standing aside to let someone else get what we want may not feel like love, but it the starting point to dying to self.

These acts seem insignificant in the light of the response of people like the ten Boom family, but each exhibition of love reflects the Holy Spirit and they can be stepping stones to other circumstances we may be called to face. Once we have taken the first step of dying to self, the next one isn’t as difficult.

And of course, Jesus is the ultimate example. His entire ministry was focused on fulfilling God’s will and ministering to people at the expense of His own comfort and safety. When dying on the cross, He was still thinking of others. He asked God to forgive those who stood at the foot of the cross mocking Him (Luke 23:34).  He thought of His mother and gave her care over to John (Luke 19:26-27).

When we focus on God and not ourselves, the love will come out. It isn’t supposed to be something that takes effort. It flows when we open the gate.

He who believes in Me, as the Scripture has said, out of his heart will flow rivers of living water (John 7:38).

How do we walk in love in a world so filled with hate? Die to self and let the Spirit shine through.

Now hope does not disappoint, because the love of God has been poured out in our hearts by the Holy Spirit who was given to us (Romans 5:5).

Join the conversation and share your thoughts. What are some ways you have seen love in action?

Email ThisBlogThis!Share to TwitterShare to FacebookShare to Pinterest
Labels: Barbara Latta, fruit of the Spirit, Galatians 5:22-23, how do we die to self, How do we walk in love in a world filled with hate, Navigating life's curves, Romans 5:5