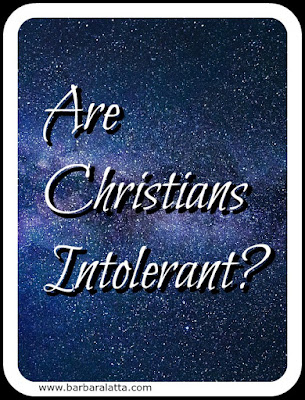 Intolerance is a word batted about like a tennis ball in the realm of politics, news and social media. A
stand against certain behaviors draws accusations of intolerance. However, those screaming these accusations are rarely, if ever, tolerant of those with differing opinions.

Because some actions and attitudes are labeled as sin, the question arises, “Are Christians intolerant?”

Let’s look at what Jesus said and did.


Some think tolerance means allowing any behavior to be unrestrained with no opposition whatsoever. If Jesus had been afraid of offending any of the people He met, none of them would have been saved or set free.

Some of the Pharisees did believe in Him. Nicodemus for one. Because Jesus confronted the wrong message the Pharisees portrayed about the Law, Nicodemus searched for the way of eternal life (John 3:1-17).

He had to offend the sin to deliver the sinner. And none of us were born without a sin nature (Romans 3:23). Confronting sin is the first step to getting rid of it. God loves people, but He hates sin because it destroys lives (John 10:10).

What if he had said, “Sorry guys, please don’t kill me, I didn’t mean to offend you?”

No cross, no redemption. We would all be lost and without hope. But God demonstrates His own love toward us, in that while we were still sinners, Christ died for us (Romans 5:8).

If those on the other side of the tolerance issue could only realize that Christians aren’t trying to hurt them, we are trying to save their lives.

But, unfortunately too many won’t listen to the message of salvation because they are blinded by their own philosophy (2 Corinthians 4:4). They somehow think that if everyone agreed and no one opposed them suddenly the world would be a happy, jolly place. But it wouldn’t because when there is no restraint of sinful behavior, sin only gets worse. And stopping sin is saving a spiritual life. 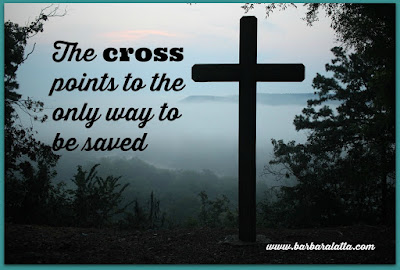 If your neighbor’s house was on fire in the middle of the night, would you stand and watch it burn because they might get offended if you woke them up to get them out?

You shall not hate your brother in your heart; you may most certainly rebuke your neighbor, but shall not incur sin because of him (Leviticus 19:18 AMP).

Jesus went to the cross and because of that He is still offending people.

For the message of the cross is foolishness to those who are perishing, but to us who are being saved it is the power of God
(1 Corinthians 1:18 NKJV).

The cross is an offense. Why? Because it points to the only way to be saved. And that requires submission (Romans 10:9-10).

And those are two things that are impossible to do if a heart has been hardened by sin. And a hardened heart can only be made soft by hearing the Word of God (Romans 10:17).

Yes, some do use the message of the Bible in the wrong way and make sinners feel hated. But that is not the heart of the gospel. A true follower of Christ will show sinners the error of their ways by shining light on the sin so love can come through.

What believers must decide is if we are willing to face persecution for taking a stand for righteousness or give in to the pressure of society and compromise the truth.

So, are Christians intolerant? Not of people, only of sin—because the Savior was, too.

For God did not send His Son into the world to condemn the world, but that the world through Him might be saved (John 3:17 NKJV).

What do you think? Join the conversation and share your thoughts.

Image by Free-Photos on Pixabay
Posted by Barbara Latta at 8:00 PM

Email ThisBlogThis!Share to TwitterShare to FacebookShare to Pinterest
Labels: Are Christians intolerant, Barbara Latta, John 3:17, Navigating life's curves, Romans 5:8, why is the cross an offense to many