If I am a New Creation...How can I sometimes act like I am friends with a Zombie?

“Blood thirsty rogues and unrepentant cutthroats,” said Ezekiel as a crowd gathered around him. His 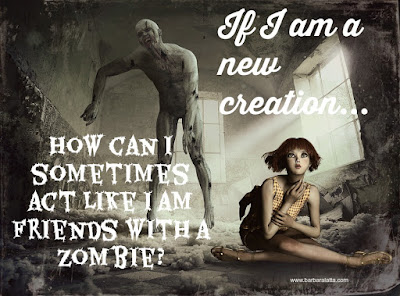 comment was meant to describe those who were hunting him and his followers.

This Ezekiel is not the biblical prophet, but a character from the TV series, The Walking Dead. I admit I have never watched an entire episode, but I have seen enough to know the humans are fleeing from zombies.

A dead body powered by an evil spirit in a post-apocalyptic world is out to suck the life out of those who are still alive. If a zombie bites or scratches a human, that human is doomed to become one of the walking dead. Wouldn’t you flee, too? A decaying, bloody skin-covered skeleton with all the characteristics of death wants your life.  Yeah, run!

The Bible says if we are born again, we are new creations. Then how can I sometimes act like I am friends with a zombie?


We know that our old self was put to death on the execution-stake with him, so that the entire body of our sinful propensities might be destroyed, and we might no longer be enslaved to sin (Romans 6:6 CJB).

Sin sucks the life out of us. We are born with a sin nature. We could say a zombie nature. Trusting in Christ takes away that nature and replaces it with His. We are now made new in our spirit, but our soul (mind) can still want to hang on the zombie traits.

That’s where the Word of God comes in to renew our minds and line our thinking up with the way God thinks. But when life gets in the way and disaster strikes, or sickness hits or someone gets in our way, the dead person wants to come out and influence our actions. I call mine Dead Girl. Dead Girl was buried when I was born again. She was placed in a grave and a new me was resurrected with Christ.

But she knocks:
And she talks:


This is what Dead Girl does. She is an unrepentant rogue and a blood thirsty cutthroat. She is the old person. Anger, bitterness, unforgiveness, greed, envy, regret, condemnation and shame are the stench of death emanating from her. Romans 6:6 says, “Leave the dead girl in the grave” (my paraphrase) because our old self was put to death on the execution stake.

The blood of Christ is the nail in the coffin. The final nail. No matter what we have done or what we still may do, the voice of love, purity and redemption reminds us He has washed away the rottenness of sin. Dead Girl’s voice must be replaced with heavenly Father’s voice.

Dead Girl will still try to rise from time to time, but her time out of the grave can become less and less the more time we spend in the Word of God. The Word is life, and life and death cannot co-exist.

After all, a cemetery is not a tourist attraction. We don’t hang around the tombs for fun, so why listen to the voice of Dead Girl and obey what she says?

We can live for God instead of being friends with a zombie when we put the Dead Girl in her rightful place-back in the grave.

Email ThisBlogThis!Share to TwitterShare to FacebookShare to Pinterest
Labels: Barbara Latta, how to overcome condemnation, how to overcome envy, Navigating life's curves, Romans 6:6, the blood of Christ, The Walking Dead, zombies