The War is Over...Between God and Man 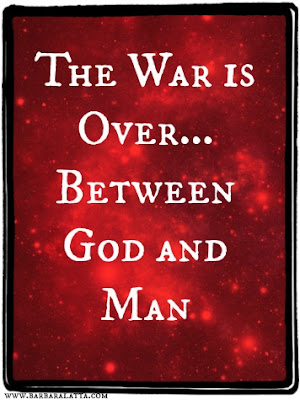 Peace on earth is often associated with Christmas because of this message in the book of Luke. But political peace was not the focus of the proclamation from the angel.

The Romans still had a stronghold on the tiny country of Israel when the announcement was made. The land was trampled years later, and the temple desecrated.

War has remained for centuries (Mark 13).

So where is this peace the angel shouted from the heavens?

They were not declaring peace on earth, but peace toward men from God. The enmity caused by sin was over.

Jesus Himself said He did not come to bring peace but a sword (Matthew 10: 34-39) and He told his followers there would always be wars and rumors of war. One of the signs of the end times is people will be fighting among themselves more and more. (Matthew 24).

The life and teachings of the Son of God causes division among people because to follow Him one must give up their own way of life and surrender to His. This causes a dying of the flesh and sometimes a dying of relationships. Division and enmity can be the result.

But Jesus’ peace dwells in the hearts of men when a selfish heart kneels in surrender to Him.
“Peace I leave with you, My peace I give to you” (John 14:27) – this is the peace the angels were 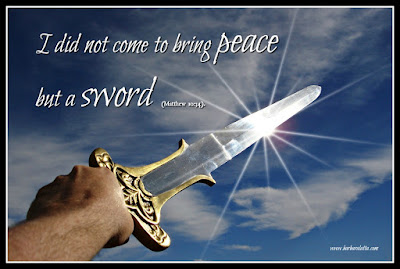 Men fight among themselves because they do not have peace within. When a heart is in turmoil, a person tries to compensate with actions to try to fill the void. Addictions and evil behavior can result.  But only Jesus can calm the soul and bring peace to life.

Without peace we feel condemned and shamed. Guilt resides and reminds us of past sins. Paul wrote “There is therefore now no condemnation to those who are in Christ Jesus, who do not walk according to the flesh, but according to the Spirit. For the law of the Spirit of life in Christ Jesus has made me free from the law of sin and death” (Romans 8:1-2). We are not under condemnation for sin any longer. When we do sin, God does not condemn us because Jesus took the punishment once and for all time.

And this is why Jesus was born.

May you celebrate Christmas with peace in your heart because the war is over. I wish you and your family a very Merry Christmas!

Email ThisBlogThis!Share to TwitterShare to FacebookShare to Pinterest
Labels: Barbara Latta, Luke 2:8-14, Matthew 10:34, Navigating life's curves, peace on earth, Romans 8:1-2, The war is over between God and man