No More Consciousness of Sin

Blood has been an issue since the fall of man in the garden. 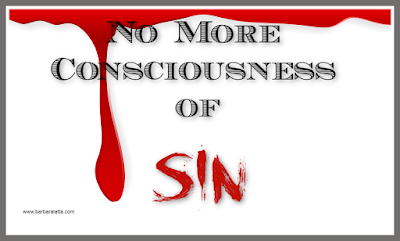 The first blood shed was when God had to kill animals to make coverings for Adam and Eve. He wrapped them in bloody fur and as they looked at the blood covering their own skin, they were reminded of the consequence of what they did. They became conscious of sin.

Without shedding of blood there is no remission of sin (Hebrews 9:22).

When God instituted the priesthood, He gave instructions for the way Israel was to offer sacrifices for their sin.


Blood was spilled day after day in the Temple. The priests work was never done because an animal sacrifice cannot take away sin. It can only cover it for a time. There were regulations the priests followed to keep the Temple area clean, but can you imagine the sight of the red flow that constantly ran? The smell of blood and burning flesh was a constant reminder of the price of the fall of man.

For the law, having a shadow of the good things to come, and not the very image of the things, can never with these same sacrifices, which they offer continually year by year, make those who approach perfect. For then would they not have ceased to be offered? For the worshipers, once purified, would have had no more consciousness of sins. But in those sacrifices there is a reminder of sins ever year. For it is not possible that the blood of bulls and goats could take away sins (Hebrews 10:1-4 NKJV).

Jesus was the sacrifice and He was also the priest. He took His own blood shed as the Lamb and in the office of our High Priest He sprinkled it on the altar in heaven (Hebrews 9:12). His work was complete and this priest sat down. It was finished (Hebrews 10:12).

Now there is no more smell of death. God said Christ in us is a sweet-smelling sacrifice.

Because sin has now been done away with as far as God is concerned. Mankind’s part is now to accept that sacrifice and be washed clean. Jesus completed the work He was sent to do so we would have righteousness and have no more consciousness of sin.

That is why He came, why He lived, why He died and why He rose from the dead.

To restore the righteous standing between God and man that was lost in Eden. He wants us to dwell on the righteousness He gave us and not wallow in the regret of sin. No more consciousness of sin.

As you celebrate the resurrection of our Lord and Savior, may you ponder the truth of His righteousness that was given to you.

Happy Resurrection Day!
Join the conversation and share your thoughts.