The Tragedy of Abandoning God

This week marks the 20th anniversary of the September 11th attacks on America.

Each year we have commemorated this event with memorials at crash sites and the reading of names of those who were lost.

These attacks have been labeled by some as judgment from God against America. But this wasn’t God’s judgment, it was the tragedy of abandoning God.

Governmental leaders have been telling God to get out of our country, education, and politics, for years. There are consequences to rejecting divine protection and provision.

Your own wickedness will correct you, and your backslidings will rebuke you. Know therefore and see that it is an evil and bitter thing that you have forsaken the Lord your God, and the fear of Me is not in you. (Jeremiah 2:19 NKJV).

For twenty years, citizens have been affected by this catastrophe. The following article reveals how many Americans feel their life was changed in some way by the terror attacks in 2001.

Now we are saddled with another tragedy in Afghanistan. We have now empowered the same terrorist organizations who attacked us in 2001 with our own weapons. And our own government is preventing the landing of planes and denying access to land in other countries for those who have been able to leave. It is astounding that our own state department is as big an enemy as the Taliban.

Political correctness has changed this country. Schools are indoctrinating children into socialism, communism, and Marxism. Terrorists can’t be referred to as terrorists. They are murderers but they might be offended by being called a terrorist.

The Bible says that God will judge the earth in the last days for refusing the sacrifice of Christ. Now we are still in a period of grace and mercy. God is giving people time to repent.

But there will come a time of judgement. How close are we now as biblical prophecies are fulfilled that have never been seen before? 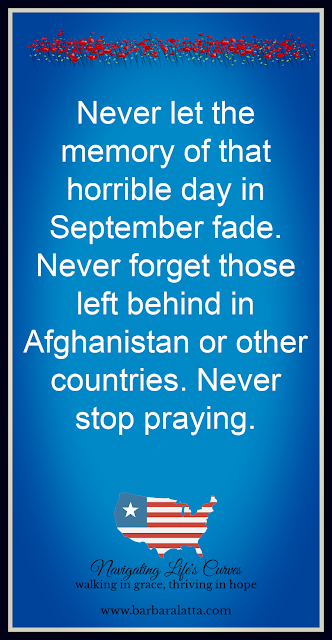 We need to pray for our nation, our military, and our government. We should pray that Americans will wake up and elect godly leaders who will return to power and reinstate the foundational principles that founded this country.

Pray for doors to open to rescue the remaining citizens in Afghanistan and other countries.

Keep your voice heard to congressional representatives. Even though the ones who now represent my state are liberal and I know how they vote, I still exercise my right to respectfully voice my opinion to them.

There are private organizations that are risking their own safety to evacuate trapped people. Here are some of them if you would like to help.

To look at what is happening through the eyes of the media can create hopelessness. But as dire as the situation is, God is working behind the scenes in ways that will never get reported.

We shouldn’t give up no matter how dark the days appear. We were outnumbered and out-gunned in World War II, but we persevered and won. It was because of praying people.

As individuals, we may think we can't make much of an impact on changing ungodly policies and decisions. But as we pray and keep our voices heard, we can bring righteousness back to our nation.

Like Winston Churchill said, “When you are going through hell, keep on going. Never, never, never give up.”

Never let the memory of that horrible day in September fade. Never forget those left behind in Afghanistan or other countries. Never stop praying. And never stop educating our youth about the cost of a free country and remembering those who have given all. This is the responsibility of a Titus 2 woman.

May God bless America and return her to be the greatest nation on earth and the city that is set on hill. That status is why we can help others.

Never let the memory of that horrible day in September fade.Never forget those left behind in Afghanistan or other countries. Never stoppraying. (click to tweet)