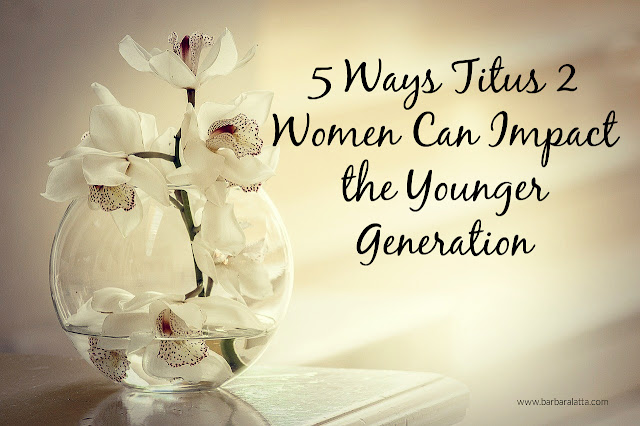 My granddaughter asked this question as she watched the smoke rise from the burnt wicks of the five candles she had just blown out on her birthday cake.

Her excitement to now hold up five fingers instead of four drew the subject of age to dominate the conversation. When I told her she would need all ten fingers six times, plus a few, to find my age her eyes grew wide. How could anyone live that long?

As the years creep upon us, labels attach to us such as “over the hill,” “empty nesters,” or at that “retirement age.” If we allow these words to identify us, we can think life is over and has no purpose any longer.

But we can follow the examples of some older biblical women who had an impact on the future of their society and on us as believers.

Naomi spent years in a foreign land after she and her family left Israel during a famine. After her husband and sons died, she longed to return to her homeland.

When her daughter-in-law, Ruth, refused to leave her side, Naomi brought Ruth with her back to Bethlehem.

Life had beaten Naomi up and she felt hopeless. But when Ruth returned from gleaning in the fields, Naomi saw God’s provision for her had not waned. He had provided for them through Boaz.

Naomi’s wisdom in instructing Ruth what to do led to the marriage of Ruth to Boaz and produced the grandfather of King David.

Elizabeth and Zechariah longed for the child denied them during their youth. But God’s timing produced the forerunner of the Messiah through their son, John. And Jesus said that there had not been anyone greater than John born of women (Matthew 11:11).

When Mary and Joseph took baby Jesus to the temple to be dedicated, Anna, a prophetess, was there praying. She had been a widow for decades but her faithfulness to God never faltered.

Because she was where God led her, she was rewarded with seeing the Christ child and was able to proclaim to all those who were willing to listen that the Messiah had been born.

These aged women still had a purpose for their lives.

Naomi had almost given up until God reminded her of her inheritance.

Elizabeth lived with disappointment, but the promise came through at the right time and her joy was greater than if John had been born when she was young.

Anna was among the first people to see the prophecies about the Messiah’s birth come to pass.

God has a place for the older women in the body of Christ. 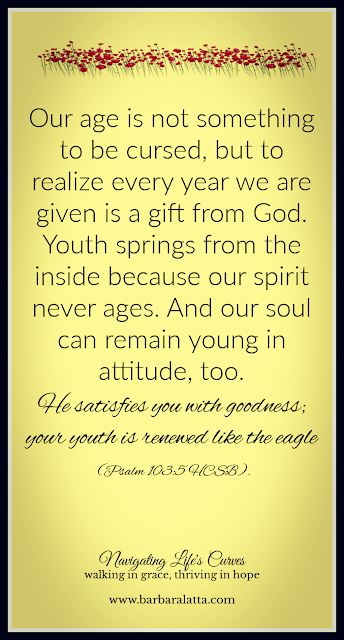 He tells us in Titus 2:3-5 HCSB, In the same way, older women are to be reverent in behavior, not slanderers, not addicted to much wine. They are to teach what is good, so they may encourage young women to love their husbands and to love their children, to be self-controlled, pure, homemakers, kind, and submissive to their husbands, so that God’s message will not be slandered.

We are to be examples and teachers to the younger generation of women who can learn from our wisdom and experience.

Here are five ways Titus 2 women can cultivate relationships with those who come after them:

1.  Record memories and leave a legacy. When we tell our children and grandchildren stories of how God has blessed our lives and families, we affect their future. In Second Timothy 1:5, Paul talks about the influence Timothy’s grandmother, Lois, and his mother, Eunice, had on the young man’s life.

One of my sons almost died twice, once the day he was born, and another when he was ill as a toddler. God brought us through both of those difficult times so our son could grow up to be a missionary. When he hears these stories, it emphasizes to him that God had a call on his life.

2. Refuse to embrace condemnation and regret. Living with regret causes stress and paralyzes our witness because we are locked into the past. But when we accept God’s forgiveness for our mistakes and live in His wholeness, we are free to be the person He created us to be.

When younger women see us living in victory, it can encourage them to leave their past mistakes behind.

Naomi, Elizabeth, and Anna all had opportunities to face regret or sorrow. But God recorded their stories for us to see that their later years had a greater significance on the future than their young years did.

Rehearse the life God has given us instead of wishing for years behind. Don’t say, “Why were the former days better than these?” since it is not wise of you to ask this (Ecclesiastes 7:10 HCSB). We can live today in the blessings from time with family and friends. (And, also, with age comes free stuff or discounts in certain venues!)

Elizabeth was fulfilled by Mary’s visit and that time together reinforced to Elizabeth the purpose her son, John, would accomplish.

4.    Relate to others by involvement. We can often find isolation easier than joining activities and functions.

Sometimes it is harder to venture into uncharted territory, but when we do, we fill our souls with the fellowship of like-minded people and those we are around can also benefit from knowing us.

Naomi returned to Bethlehem with a bitter soul. But once she became involved in Ruth’s future, her heart was renewed, and Naomi benefited from Ruth’s gain.

5. Realize we never stop learning. God will continue to speak to us until He calls us home.

Anna stayed in the temple fasting and praying even though she was eighty-four years of age. And because of her obedience she was there when Mary and Joseph brought Jesus to be dedicated.

Our age is not something to be cursed, but to realize every year we are given is a gift from God.

The physical pursuit of youth only treats symptoms. We may cover the gray hair (yes, my color still comes from a box), lift our skin, or do a nip or tuck here and there.

But our youth springs from the inside because our spirit never ages. And our soul can remain young in attitude, too. He satisfies you with goodness; your youth is renewed like the eagle (Psalm 103:5 HCSB).

When we show younger women our vitality and faithfulness, we encourage them to do the same. Someday they will be the older ones teaching those who come after them.

The famous expression, “You are as young as you feel,” is true when we see ourselves through God’s eyes.

On eternity’s timetable, we are just beginning.

Can you think of ways you can make an impact on the younger generation while you enjoy the life God has given you?

Our age is not something to be cursed, but to realize every year we are given is a gift from God. (click to tweet)