What did our Savior mean when he prayed, “lead us not into temptation?”

And do not lead us into temptation, but deliver us from the evil one. (Matthew 6:12 NKJV)

We know the Son of God didn’t pray a prayer that couldn’t be answered.

Then why are we tempted?

Because it is the devil, our enemy, who does the tempting to get us to fall.

Let no one say when he is tempted, “I am tempted by God;” for God cannot be tempted by evil, nor does He Himself tempt anyone. But each one is tempted when he is drawn away by his own desires and enticed. (James 1:13-14)

Jesus was enticed with food (turn these stones to bread), His identity (if you really are the Son of God), and to question the validity of the Almighty’s Word (fall down and worship satan to gain power).

There is a deeper meaning to the allurements about food than simply satisfying hunger. Adam and Eve may not have been that hungry when the serpent drew them to the forbidden tree. After all, they were given every other tree in the garden to eat from. No lack existed.

But it promised them a selfish satisfaction (1 John 2:16). Lust of the flesh (hunger for something different), lust of the eyes (fruit looked good), pride of life (have the same power Jehovah has).

Satan used the same tactics against the Son of God, but with different results. 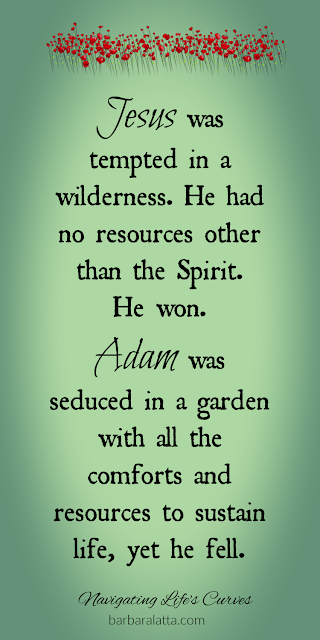 It wasn’t sinful to turn an object into food. The coercion to create bread from rocks was about baiting the Messiah to use His power to satisfy His own needs. He resisted.

Adam had been given the rulership of the earth and told to dominate and subdue it. This should have told him something or someone was coming that needed to be subdued. But the talking snake convinced Adam that he was a nobody and powerless.

Satan used twisted words to get Eve to question the commands of the Most High about eating from the tree. Eve responded with a misquotation. The Lord never told them not to touch the tree (Genesis 3:3).

The devil quoted Scripture to Jesus and used it in the wrong way to entice Him to give in and worship the fallen angel. Christ answered with the correct use of the text to shut the devil up.

The verses in James quoted above tell us we are manipulated when we are drawn away by our own desires.

We face the traps of comparison, insecurity, and pride, which result in depression. If we are dominated by these feelings, it reflects we are self-focused instead of Christ focused. Our position in Christ is not secure in our lives.

Temptation speaks to our flesh. It is all about satisfying self.

Jesus won the victory over evil persuasions to show us how to do the same thing. He was filled with the Holy Spirit at His baptism and grew up on the Word.

The King of kings was tempted in a wilderness. He had no resources other than the Spirit, and He won.

The ruler of the Creator’s world was seduced in a garden with all the pleasures and resources to sustain life, yet he fell.

What can this tell us?

Our Redeemer was 100% deity, but He lived in a 100% physical body that had the same inclinations and needs ours have. He had a soul that battled thoughts.

At the Lord’s weakest point, satan came to Him with the lure to feed the desires that cried out for satisfaction. Emmanuel overcame because He was more focused on the will of His Father than He was concerned about Himself.

Our battles take place in our minds and emotions. Denying our flesh so we can grow stronger in our souls arms us with the weapons to cast down these imaginations and remain free from the sentence of imprisonment (2 Corinthians 10:5).

We are to subdue the way Adam was commanded to do. This is why we should be well-versed in Scripture so we can recognize lies and misconceptions.

Jesus was tempted in a wilderness. He had no resources other than the Spirit, and He won. Adam was seduced in a garden with all the pleasures and resources to sustain life, yet he fell. (click to tweet)

We face the traps of comparison, insecurity, and pride, which result in depression. If we are dominated by these feelings, it reflects we are self-focused instead of Christ focused. (click to tweet)

(Grammar rules tell us to capitalize satan, but I don’t think he deserves it, so on this site he doesn’t get the status of a proper noun.)