Growth is Determined by the Depth of the Roots 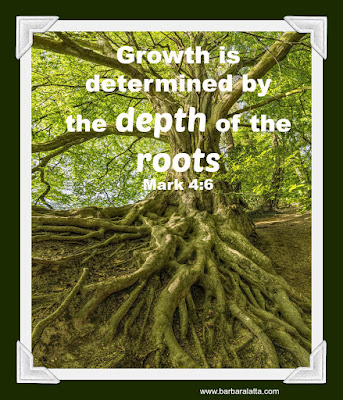 Blessed is the man who walks not in the counsel of the ungodly, nor stands in the path of sinners, nor sits in the seat of the scornful; but his delight is in the law of the Lord, and in His law he meditates day and night. He shall be like a tree planted by the rivers of water that brings forth its fruit in its season, whose leaf does not wither; and whatever he does shall prosper (Psalm 1:1-3 NKJV).

A science demonstration I watched showed two clear bins on a table. Both contained potting soil, but one only held a few inches of dirt while the other one was nearly full. Seeds were planted in both pots at the same time. They were both watered and fertilized the same amount. In a few days the bin with the shallow soil was sprouting little green sprigs. The other one still had nothing on the surface but dirt.

In a couple of weeks, roots were seen stretching their way through the soil of the deeper pot, but still no evidence above ground.

The shallow pot had a tall, green plant. It’s roots could be seen through the clear sides and they were down to the bottom, crowding each other and filling the dirt.  But in a short time, that plant began to wither and die.

The deeper soil began to produce a small plant. But beneath that plant deep roots could be seen that were twice the size of the product on the top.

You see, roots had to be put down before life-sustaining growth could be maintained.

The plant in the shallow soil died because it’s growth was determined by the depth of the roots.

Jesus told a parable of a sower sowing seed in Mark chapter 4. Some of the seed fell on stony earth and could not put down deep roots so the sun scorched it and it died.

The seed that fell on good ground produced a crop. Ground that allowed roots to grow and reach water and nourishment.

Jesus goes on to explain the parable telling His disciples the seed that fell on stony ground is like those who hear the word of God but have no root in themselves so they fall away when Satan tempts and attacks.

Like the plant in the science experiment, our spiritual growth will be determined by the depth of our roots.

The way to grow deep roots is to eat:
I am the bread of life. He who comes to Me shall never hunger (John 6:35a).

One of my favorite seeds is Ephesians 1:3, Blessed be the God and Father of our Lord Jesus Christ, who has blessed us with every spiritual blessing in the heavenly places in Christ.

Are your roots as deep as you want them to be? May we all, as the body of Christ, be a fruitful garden, springing up bearing the fruit of the Spirit to feed a hungry world.
Feel free to share some of your favorite spiritual seeds.

Email ThisBlogThis!Share to TwitterShare to FacebookShare to Pinterest
Labels: Barbara Latta, bread of life, Growth is determined by the depth of the roots, John 4:26, John 6:35, Living Water, Navigating life's curves