Did Jesus Really Die on Friday?

We celebrate Good Friday as the day of the crucifixion.  Humanity’s sin was paid for when Jesus’ 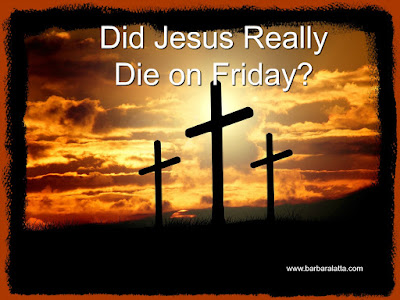 blood ran down the cross into the ground. His body was placed in a nearby tomb because of the Preparation Day.

The Bible says that the day after the crucifixion was the Sabbath and that the women came to the tomb to anoint the body on the first day of the week which is Sunday (Mark 16:1-2).

I was always confused about this because Friday to Sunday is not three days.

And Jesus clearly stated He would be in the ground for three days and three nights.


Leviticus 23:4-8 gives the instructions about Sabbath and Passover observances. There is more than one kind of Sabbath in these verses. The day after Passover was the beginning of the Feast of Unleavened Bread and was considered a day of rest.

Therefore, because it was the Preparation Day, that the bodies should not remain on the cross on the Sabbath (for that day was a high day), the Jews asked Pilate that their legs might be broken, and that they might be taken away (John 19:31).

This verse shows that this Sabbath was the special Sabbath (called the high day in the verse) after the Passover and would have been on a Wednesday.

The Jewish days were observed from sunset to sunset, not morning to evening like we use.

Jesus could have come out of the grave any time during the night on Saturday. We celebrate resurrection on Sunday because that is when the women found the open tomb and the body gone. But since Jesus was already gone, He could have left the tomb at any time the night before. The stone was rolled away so everyone could see inside, not so He could get out. His new glorified body was not limited by physical boundaries (John 2:19).

So, in my opinion, according to the verse in John 19:31 which corresponds to Leviticus 23:4-8, I think Jesus was actually crucified on Wednesday and not Friday.

But the important thing to know is this. Jesus died and was resurrected.
He bought our redemption and sin was paid for. End of story.

I would like to know what you think about this theory. Please feel free to share your thoughts.