Stuck by Paul's Thorn in the Flesh 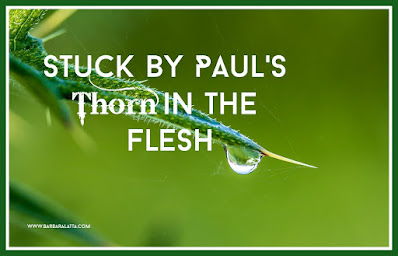 During my Christian walk, I have heard different theories about Paul’s thorn in the flesh. We can get stuck (as in bogged down) in discussions and theories of what this irritation was in his life.

Some have said he had bad eyesight.

Others that he walked with a limp or had some serious disease.

These speculations originated from an interpretation of Galatians 4:12-15 where Paul is talking about his infirmities and stating the faithfulness of the church at Galatia that they would have “plucked out your own eyes and given them to me.”

Because of this verse, the theory began that Paul had bad eyesight. But to look further at what he was speaking about takes us back to Acts 14:19-20. Paul and Barnabas had preached and performed miracles in the town of Lystra which is in the province of Galatia. He was stoned and left for dead. In the letter to the church of Galatia Paul outlines in chapter four, the care that church gave to him. After being stoned and left for dead, a person’s eyes would be swollen and possibly shut and more than likely if he could walk at all he would walk with a limp for some period of time. But this was a temporary infirmity. And the church took care of him while he healed.

As the verse clearly states, the thorn was a messenger of Satan to buffet him. Paul was tormented by a demon from hell to try to stop him from preaching the gospel of Christ. He was persecuted everywhere he went with stoning, beating, imprisonment, revilement, mobs, riots and shipwrecks. When he states he was given this thorn to keep him from being exalted, we can conclude from the nature of God that the Lord does not give demons to us (John 10:10). The thorn came from Satan who didn’t want Paul or his message exalted in front of people. So, the devil did everything he could to bring Paul down and stop the message.

Persecutions, afflictions, which happened to me at Antioch, at Iconium, at Lystra—what persecutions I endured. And out of them all the Lord delivered me (2 Timothy 3:11 NKJV).

We are redeemed from sin through faith in Christ when we believe and accept Him (2 Corinthians 5:17.)

We are redeemed from sickness through the same faith in Christ when we believe and stand on His Word (1 Peter 2:24).

But we are not redeemed from persecution (2 Timothy 3:12). That’s why Paul says he asked the Lord three times to take away the tormenter and God replied, “My grace is sufficient”,(2 Corinthians 2:9). His grace is what keeps us standing in the face of persecution.

While these views may be contrary to some, this is the interpretation I received when reading and studying these scriptures. And when this revelation came to me, it made these passages clearer and answered questions that seemed to be confusing. That’s why it is so important for us to dig deeper when we have questions and not merely rely on religious traditions that have been handed down for generations.

I hope this helps you in your study. I certainly don’t claim to have all the answers about anything, but these scriptures helped me get “unstuck” about Paul’s thorn in the flesh.