After the children of Israel defeated Jericho and crossed the Jordan River into the Promised Land the Lord told Joshua to take twelve stones from the riverbed and place them on the land they would occupy (Joshua 4:1-3).

What was so important about leaving a memorial?

Generations later, children who were born to them would not know about the slavery of Egypt and the awesome events that set them free, the wilderness wandering and God’s miraculous provision, or the supernatural defeat of enemies, unless someone told them the stories.

The stones were to serve as a reminder to tell future generations about the goodness and strength of the God they served. 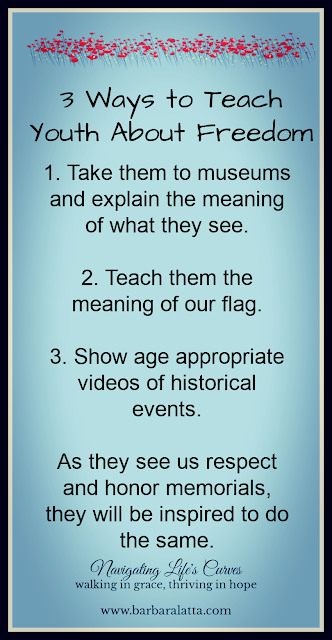 Our past history is what makes us who we are today. No matter what nation a person lives in their country’s legacy leaves a mark. In some cases, it is a painful mark as millions have suffered at the hands of cruel dictators who ruled with an iron fist and took away the very soul of humanity. And America has its share of painful lessons learned from the Civil War.

Our country has enjoyed centuries of freedom that cost the blood, pain, and lives of millions of men and women. We have been attacked but we persevered. We have defended those who were threatened by despots and dictators to bring them the same freedoms we enjoy.

Our willingness to fight and push back is part of the legacy born into this nation with the birth certificate of our Constitution.

America is the defender of the defenseless and the homeless.

That’s why we have memorials. Without the museums, monuments, and medals given out to heroes, we would not remember the sacrifices someone else paid for the reward we have today.

As Titus 2 women, we have the responsibility of teaching generations behind us why we are so blessed. Those who haven’t lived through times of war and struggle are not aware of the pain the defenders suffered.

Here are 3 ways we can teach children about freedom through memorials and monuments.

As they see us respect and honor memorials, they will be inspired to do the same. 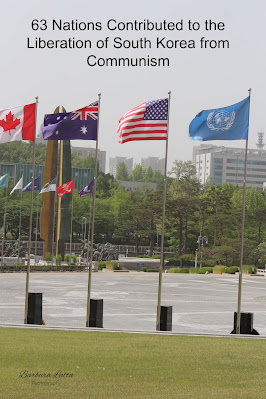 As the Israelites gathered memorial stones to teach their children the legacy of their freedom from bondage, the importance of memorials and monuments can be used to teach us about ours.

Memorials also serve as a lesson to us of mistakes that were made. We are a free people, but not a perfect people. We can learn from the past, so we don’t repeat it.

Ken and I recently visited the Korean War Memorial Museum. I love learning about history, and I found out some information about the Korean War I didn’t know before.

At the end of World War II, US and Soviet forces divided Korea along the 38th parallel. In 1950 the North Korean leader, Kim Il Sung, decided South Korea needed to be “liberated” and elicited the aid of Chinese and Soviet leaders.

Almost 100,000 North Korean soldiers advanced across the 38th parallel and overcame the South Koreans almost to the end of the peninsula. Under the command of General Douglas McArthur, UN forces comprised mostly of United States and South Korean troops finally pushed the North Koreans and their communist allies back. The city of Seoul was taken and retaken four times. In all over 63 nations contributed to the liberation of South Korea. 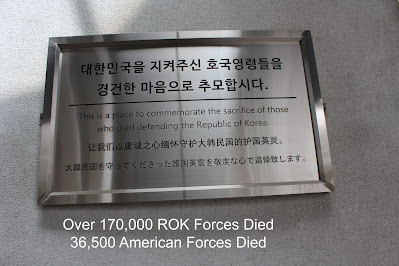 The history lesson I learned from a visit to this museum makes the cost of freedom more precious. Over 170,000 Republic of Korea forces were killed during this war, and 36,500 American forces died to liberate this southern Korean peninsula from the threat of communism.

On this Memorial Day, please take the time to remember all those who have died on battlefields since the founding of America in 1776.

And more than that, thank God for the freedom we have in Christ because of what He did over 2,000 years ago. Because of His sacrifice we can all be free from the prison of sin.

Please feel free to share your thoughts on why you think we should honor memorials.

On this Memorial Day, please take the time to remember allthose who have died on battlefields since the founding of America in 1776(click to tweet)