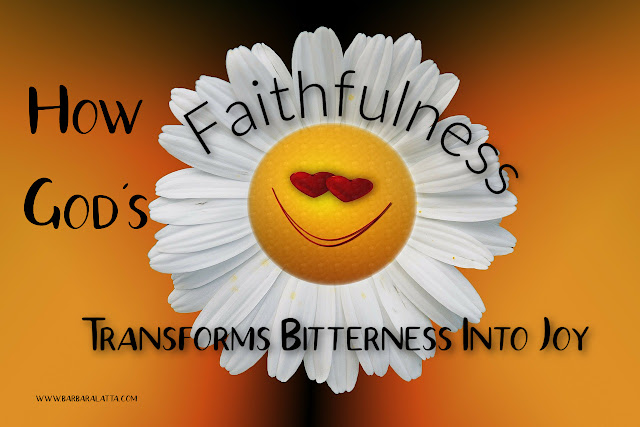 The Faithfulness of God series continues as we see how Jehovah provided for Naomi in her old age through Ruth. God’s faithfulness transformed Naomi’s bitterness to joy.

Naomi followed her husband to another land when famine struck the area of Bethlehem. The Bible doesn’t tell us why other people stayed behind during the times of lack and Elimelech decided to take his family to Moab.

There is no indication he was following God’s direction. It seems he acted on his own feelings and lack of trust in God.

But Naomi was a faithful wife and left with her husband and two boys as they traveled to the land of Moab. Once they had been there for some time, the two sons married Moabite wives, which was a violation of God’s commands (Deuteronomy 7:3). 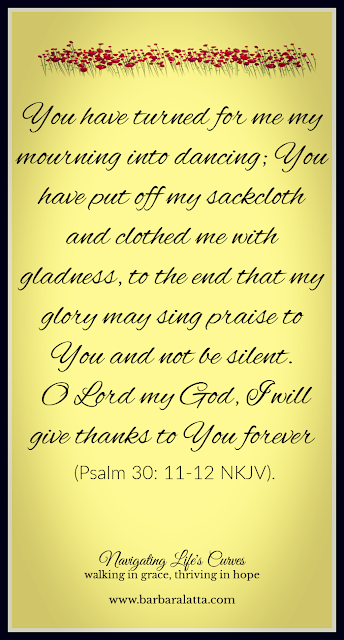 When Elimelech, Mahlon, and Chilion died, Naomi was left with no family except her two daughters-in-law. As a widow she decided to go back to her home in Bethlehem.

The fact that Ruth and Orpah wanted to go with Naomi is a testimony to her godly living despite residing in a heathen land.

Her influence had impacted them enough that they were willing to leave with her. Orpah finally stayed behind, but Ruth was determined to remain with Naomi.

How did God’s faithfulness turn Naomi’s bitterness into joy?

Naomi relied on God’s wisdom when she instructed Ruth what to do in Boaz’s fields.

The result was Ruth's marriage, her son who became the great-grandfather of King David, and provision for the rest of hers and Naomi's lives.

Naomi and Ruth returned to Bethlehem desolate and poor, but God’s provision made them rich and gave them a royal heritage.

Although bitterness invaded Naomi’s heart and blinded her to Jehovah’s past promises, His faithfulness showed her she was not forsaken.

At times bitterness can blind us to the promises of our Father too, but we can depend upon God to be faithful to His word and never forsake us.

Our world can surround us with ungodly images and beliefs. But as we absorb the words of our Father, we can eliminate the power these attitudes have over us.

Naomi didn’t let the culture around her sway her dedication to the God of her fathers. She taught Ruth and Orpah enough about her God that it left an impact on them. Ruth was so influenced by Naomi she was willing to leave everything behind and go to a new land.

Our Father’s provision is extended to us the same way. As Titus 2 women, we are instructed to encourage the younger women and educate them about God’s faithfulness.

God’s sweetness flows toward us with the same favor He gave to Naomi and Ruth through Boaz. He gave us a kinsman redeemer in Jesus. Our bitter times can turn to joy when we accept His love.

You have turned for me my mourning into dancing; You have put off my sackcloth and clothed me with gladness, to the end that my glory may sing praise to You and not be silent. O Lord my God, I will give thanks to You forever (Psalm 30: 11-12 NKJV).

God is faithful even when we are not.

What are some other lessons you have gleaned from the story of Naomi and Ruth? Join the conversation.

God’s sweetness flows toward us with the same favor He gaveto Naomi and Ruth through Boaz. He gave us a kinsman redeemer in Jesus. Ourbitter times can turn to joy when we accept His love. (click to tweet)